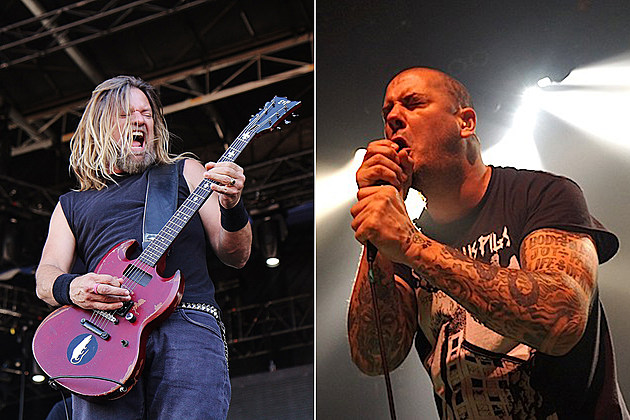 The storm rages on following Philip Anselmo‘s incident at Dimebash 2016 two weeks ago. The iconic frontman delivered a Nazi salute and yelled “White power!” onstage after the performance of Pantera‘s legendary “Walk.” Fans and musicians have been quick to fire back at Anselmo, disapproving of his actions. Down have been stricken from the FortaRock festival in the Netherlands, leading Anselmo to issue a second apology and suggest that his bandmates move on without him. Now, Down guitarist Pepper Keenan has weighed in on the events, plus the band’s upcoming hometown show has been canceled.

In his statement, which was posted to Facebook and seen below in its entirety, Keenan details his thoughts on Anselmo’s actions, explaining he does not approve of his singer’s behavior, but accepts the apology made to the rest of Down. The guitarist focuses on the music he and Anselmo have made together and the lives they have touched because of it, emphasizing he uses music as a tool to help the world in a positive manner. Keenan’s statement reads as follows:

Any one who knows me is aware that I am not one to dabble much in social media, however due to what transpired last week at Dimebash I feel the need to respond and reach out to friends, family, music peers and fans worldwide.

I am saddened and confused by the behavior of Philip Anselmo last week. I do not condone what was gestured and said. This lapse in judgment of “making a joke” was in terribly poor taste and unacceptable.

That philosophy is the opposite of what I am about. My heart follows love and soul and my music has been inspired from people of all walks of life and musical styles. I view music as a gift that is universal and intended for all of humanity. As a proud New Orleanian, life is about celebrating diversity through music, it’s about bringing people together, not tearing apart.

I won’t speak for Phil but I’ve known him most of my life and I know there is not hate in his heart, however I hope at this moment in time Phil will focus his energy on self-reflection and begin the process of regaining perspective, healing himself and those lives he has touched through music

Through Down, Philip and I have written many beautiful and powerful songs in the past that have touched and inspired people from all walks of life positively and have helped pull many out of their own darkest hours. This is not something I take for granted and should always be at the forefront of one’s conscience to keep you grounded, humbled and grateful.

One of the responsibilities and joys, in my opinion, of being an artist or musician is having the ability to help make the world a better place.

I accept Phil’s apology, and I believe he can.

Earlier today (Feb. 4), Anselmo posted a lengthy second apology on his website, including an apology to his Down bandmates, stating, “My band mates are now experiencing the consequences of my behavior, and I now publicly apologize to them as well. Never in my entire lifetime would I drag them down with me, and I’ve privately suggested to them that they move on without me.”

A second Down concert has been axed following the incident, originally scheduled for Feb. 8 in the band’s hometown of New Orleans. The Civic Theatre released a statement explaining their reasoning as well as a quote from reggae legend Bob Marley:

After recent actions by Phil Anselmo during the Dimebash event this past week, we have cancelled Down’s performance at the Civic. We do not tolerate intolerant behavior, and there is no room for that in our venue or our city. Refunds are available at point of purchase. In addition to offering full refunds for all ticket purchases, the Civic has made a donation to the Jewish Federation of New Orleans, pledging our support for a united community.

Down currently have dates booked in Europe, including performances in Germany, France, the U.K. and more. Whether those dates will stay intact remains to be seen.