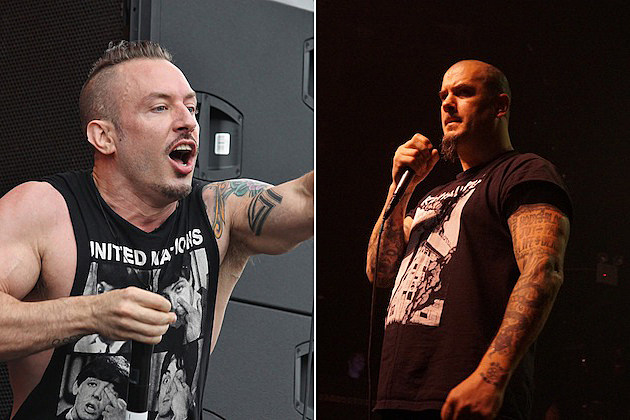 Philip Anselmo has come under fire after throwing a Nazi salute and bellowing “White power!” at the recent 2016 Dimebash event. Meanwhile fellow musicians have come out against these actions, including Machine Head‘s Robb Flynn and Anthrax‘s Scott Ian among others, and Greg Puciato of Dillinger Escape Plan has thrown his thoughts into the mix as well. Rather than taking a side, he just flat out doesn’t care if the singer’s apologies are ever met with acceptance.

“I mean, I think it’s unfortunate just because … metal has a hard enough time,” Puciato began telling Sticks for Stones (audio below). Continuing, he said, “Metal and rock have a hard enough time, I think, getting taken seriously, and a lot of the reason why is stuff like this happens and then the outside world just sees that.”

Referring to the racist actions of Anselmo, he said, “They hear, ‘Oh, this guy from this band is f–king ‘sieg-heiling’ on stage and yelling ‘white power.’ And everyone goes, ‘Of course that’s what he did. He’s in a f–king heavy metal band. They’re all a bunch of f–king retards.’ That’s what people say outside of it. It’s really bad for the genre, but it’s just offensive, man.”

Puciato had a neutral response to Anselmo’s apologies, adding, “I don’t particularly care whether he gets forgiven or not, ’cause I don’t give a s–t about anything he’s done since [Pantera‘s] Far Beyond Driven. So I truly don’t care. I don’t pay attention to it.”

That doesn’t mean he doesn’t care about the actions, however. “I just feel bad on a humanistic level. I don’t care about whether he is forgiven, or about Pantera, or anything like that. I just care on a humanistic level,” Puciato started. Explaining how it hurts the fans, he explained, “There’s people that are probably fans of him that are f–king extremely bummed out now. And not just bummed the way I am, or the way you are, but bummed because it directly, personally offends them. They’re black or they’re Jewish or they’re Asian, or they’re not f–king white.”

In closing, Puciato commented on how out of touch Anselmo is, bringing everything into context by saying, “It’s f–king 2016, man. You might as well f–king yell out f–king, ‘Burn f–gots at the stake’ while you are on stage or something like that. It’s just, like, c’mon, man.”

A second apology from Anselmo came yesterday with a statement occupying the homepage on his website. The singer was raw and honest in assessing his actions, stating, “My biggest obstacle(s) are the over-indulging in the booze and blurting out spiteful, ignorant reductions of the human spirit itself. I will address these issues, head-on. I’m repulsed by my own actions, and the self-loathing I’m going through right now is justified by the hurt I’ve caused.” He also apologized to his bandmates in Down, who have now been removed from a hometown show in New Orleans and a FortaRock festival appearance in the Netherlands.

Down guitarist Pepper Keenan responded by accepting Phil’s apology to the band and admitted his singer erred at Dimebash, adding, “This lapse in judgment of ‘making a joke’ was in terribly poor taste and unacceptable.”