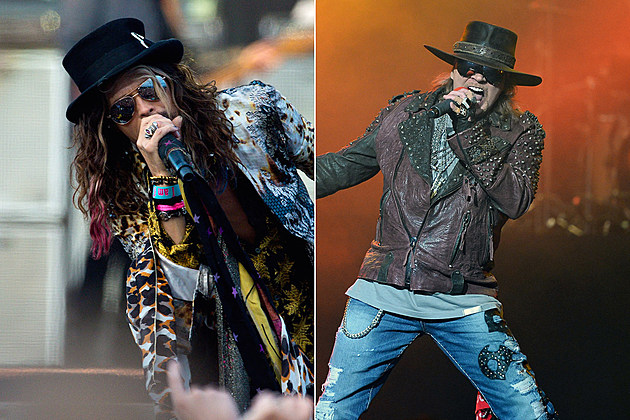 After months of rumors that the classic members of Guns N’ Roses would be reuniting, it has been confirmed that Slash and Duff McKagan have reunited with Axl Rose. While everyone from fans to fellow musicians were clamoring for the reunion for years, Aerosmith‘s Steven Tyler believes he had a significant hand in fostering the return of one of rock’s most transcendent musical acts.

Appearing on Howard Stern, the shock jock asked Tyler if he was responsible for getting Slash and Axl Rose talking again, and he shunned taking credit (audio below), but provided an anecdote linking the possibility to him. “I’m sure I’m not solely [responsible],” the singer began, “But I did meet Axl in a couple of clubs a year ago and two years ago and three years ago.” Continuing, he added his input in regards to the reunion, saying, “I bumped into him, and I had that talk… I said, ‘You need to get f–king back together again soon, because we all miss you.’”

The advice was not unique as Tyler went on to detail how another rock star gave him the same advice. “Same thing someone said to me when Joe [Perry, Aerosmith guitarist] and I were fighting. ‘You’ve gotta get back together. What are you, crazy?’ In fact, it was Jon Bon Jovi.  I’m in rehab. He calls me up and goes, ‘What the f–k are you doing in rehab? The world needs you. We’re out here ripping it up and everybody’s asking for Aerosmith. You need to get out of here, because people in the world need you.’”

Echoing the words that worked so well for him, Tyler described what he told Axl, stating, “So I’d say to Axl, ‘You’ve gotta get together. There’s a place and time where if you don’t, you’re gonna miss it.’ And in another four or five years, no one’s gonna even know who they were or care if they’re on tour, and that’s Steven Tyler’s opinion.”

Talking from a similar standpoint, Tyler speaks brutally from the heart but with good intent. Relaying the importance, he said, “And also, I’m the lead singer of another great band, so I have a right to feel that way. I have such a huge ego about keeping the fire and the music together. Because if people come up to me and say, ‘Dude, I got laid to your music,’ or a woman comes up to me and says, ‘We got married to your songs.’ You had something to do with the fabric of people. Guns N’ Roses had something to do with the fabric of humans on this planet, so I get f–king pissed.”

Guns N’ Roses will be playing the Coachella festival and so far have announced two dates in Las Vegas with more expected. Slash and Duff McKagan are back in while the world waits for confirmation on the possibility of other classic members including Izzy Stradlin and Steven Adler. The latter is reported to be in negotiations for a role in the reunion, though possibly in a limited capacity.