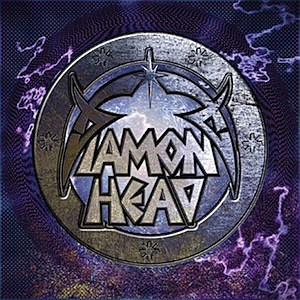 New Wave of British Heavy Metal cult legends Diamond Head are prepared to unleash their seventh studio album and first since What’s in Your Head? which was released in 2007. Due March 11, the self-titled Diamond Head will be the first to feature new singer, Rasmus Bom Anderson, who joined the group in 2014, replacing Nick Tart who enjoyed a decade-long tenure with the influential act.

Having completed a 2014 European tour, the group felt a creative buzz and found the inspiration to write another record. “When we began talking with Ras about making a new record, he said we should write the songs as a band just like Diamond Head did at the beginning of our career,” began lone original member Brian Tatler. “There’s no substitute for writing together in the same room. We spark each other off and create something far bigger than we could have done individually.”

Continuing, Tatler added, “Ras has certainly renewed the energy within the band. I had no interest in doing another record, but after working with Ras on the European tour, that all suddenly changed. I wanted to make a record with him. He’s a confident singer and he’s not trying to fill anyone’s shoes.”

Writing together in the same room with the rekindled flame of the old days, the founding guitarist stated, “This new album has an echo of the early albums, but I always try to push our music forward somewhere new if possible.”

“All in all this album was made with the band’s first fans foremost in mind, from start to finish. We wanted to write songs that would have ties to the best parts of the all the previous albums,” said the new singer, going on to add, “We feel we have achieved what we set out to do and we hope everyone will hear and feel the Diamond Head spirit through this new eponymous record.”

Diamond Head gained the most notoriety outside of their underground following when Metallica covered their epic song, “Am I Evil?” off the Lightning to the Nations debut. The cover was featured on the B-side of the Metallica single “Creeping Death” in 1984 and has been a fan-favorite ever since.