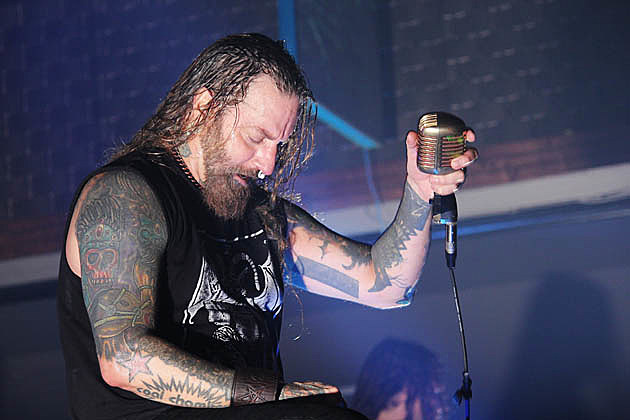 Metalcore merchants Devildriver will be bridging the three year gap between studio album with Trust No One. The follow-up to 2013’s Winter Kills will be out May 13 on Napalm Records and the band has confirmed they have wrapped up the recording process and unveiled a teaser clip of a new song straight from Audiohammer Studios with producer Jason Suecof.

Posting on his Instagram page, frontman Dez Fafara revealed he and Suecof labored for 12 hours finishing all the vocal takes for Trust No One and the album will soon enter the mixing stages courtesy of Mark Lewis, who has worked with the band in the past. The tattooed singer posted a clip of new music along with lyrics, serving up the first taste of what fans can expect from the “California Groove Machine.” The clip stays true to the band’s nickname, employing a powerful rhythm and the barked vocals of Fafara following along in a catchy fashion.

“EAST OF THE ANCIENT SUN BEYOND THE VALLEY OF THE CORPSES , ILL BE WAITING FOR YOU ,WHERE ALL LOSS OF HOPE IS ,NO REMORSE I SPIT ON YOUR CORPSE NOTHING LEFT TO DO , BUT PUT MY BOOT ON YOU , IVE GOT NO REMORSE ! ” #TheCaliforniaGrooveMachine #Lyrics

Thank you @jason_suecof for working so hard this week with me and for today pushing a 12 hour day doing VOX and finishing up this record with me , I am proud to say WE ARE DONE and now we get to share it with the world! Once @marklewis720 mixes this record it’s gonna be a Monster ! #DEVILDRIVER #TrustNoOne #IveNeverWorkedSoHardEVER #NapalmRecords #ReturnOfTheGroove #TheCaliforniaGrooveMachine

The record will be the first with guitarist Neal Tiemann and drummer Austin D’amond, who replaced long-time members Jeff Kendrick and John Boecklin respectively. Tiemann is the third new member the band has enlisted over the last three years, but the sample has provided enough evidence the band is as volatile as ever in just a few seconds.

Devildriver will be providing direct support for hardcore heavyweights Hatebreed starting on the launch of Trust No One. Hatebreed will be touting their new release, The Concrete Confessional and the two will serve as a knockout one-two punch live as Devildriver bring pummeling grooves that play well into Hatebreed’s rhythmic dominance and fist-raising energy. For a full list of dates, visit our 2016 Guide to Rock + Metal Tours.