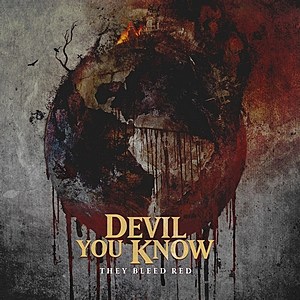 Last year’s debut album, The Beauty of Destruction, landed at No. 50 on the Billboard 200 album chart, and Devil You Know have been doing a lot of touring since their formation, playing festivals and opening for more well-known acts to get in front of as many people as possible to continue to build an audience.

Their new album, They Bleed Red, is a natural evolution and a step forward for the band. This time around they worked with producer Josh Wilbur (Lamb Of God), while bassist Ryan Wombacher also participated in the recording of the album (Artusato handled both guitar and bass on their debut). This is a much more cohesive album, as they have built up a nice chemistry over the past few couple years that’s reflected in the songwriting.

Artusato said that Devil You Know wanted a heavier and more straightforward sound for They Bleed Red, and that’s evident from the opening song. “Consume the Damned” has an aggressive approach with driving riffs. Jones utilizes harsh vocals for most of the crushing track.

The intensity continues on “The Way We Die,” adding in a catchy melodic chorus alongside a lengthy shredding solo from Artusato. “Shattered Silence” has some of the heaviest moments on the album, including a thundering performance on drums from Sankey, which is tempered by some clever grooves and melodic moments.

For those wanting to hear Jones’ softer side, “Let the Pain Take Hold” fits the bill. It’s a power ballad that ebbs and flows from subdued to arena rock mode. It features all melodic singing and is the most accessible and radio-friendly song on the record.

The guitar work throughout the album is excellent. Artusato gives a virtuoso performance with numerous flashy solos along with interesting acoustic parts on songs like “Broken By the Cold” and solid riffs from beginning to end.

Devil You Know have upper their game with They Bleed Red. They have fulfilled their goal of making it heavier than their debut, but there’s no shortage of melody, either. It’s a dynamic sophomore effort that shows Devil You Know have the potential to be a viable long-term band, not just a one-off supergroup project.

‘They Bleed Red’ is available through iTunes or the Nuclear Blast merch site.

Devil You Know Cover Survivor’s ‘Eye of the Tiger’