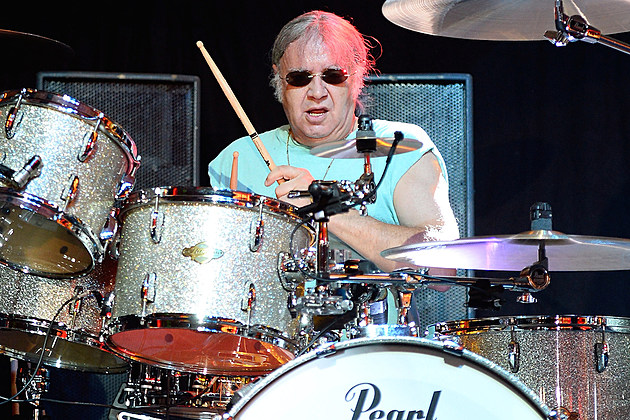 With the announcements for the 2016 Rock and Roll Hall of Fame inductees coming tomorrow (Dec. 16), the rock community is anxiously waiting to see if Deep Purple will once again get snubbed or will finally be counted among hundreds of other artists who have made it in before them. The band’s founding drummer Ian Paice is wondering what would happen if they are inducted considering the band’s history of legendary players, some of whom do not get along very well.

“Well, who would they induct?” Paice rhetorically asked Classic Rock when speaking about possible inclusions and exclusions if his band were to finally receive the honor. “There have been so many members of this band, even if they say it will be core members, who would it be?”

Before splitting up in 1976, there were famously four incarnations of the band, labeled MK I, II, III and IV. MK I included singer Rod Evans and scored hits with covers like “Hush” and “Kentucky Woman,” II was the most successful including frontman Ian Gillan, III saw the entrance of David Coverdale and Glenn Hughes and IV experienced the departure of Ritchie Blackmore and a one-off album with guitarist Tommy Bolin who died of an overdose before the band folded. The MK II lineup reunited in 1984 and famously stormed back with Perfect Strangers. Deep Purple have undergone several lineup changes since, but still remain active on tour and in the studio.

Also being careful to note strained relationships that exist between some of the band’s former members, Paice continued, “You also have to bear in mind, that if some people are inducted together, it could end in a punch-up. I don’t need to tell anyone certain key members and former members of this band do not get on. Personally, I think they would be better off inducting us individually. That avoids the problem.”

The induction isn’t the only problem as inductees are often asked to perform at the ceremony. The Deep Purple drummer added, “As for playing live, again who would be involved? You’d have the same situation as for an induction. This one won’t play with that one — it could be a mess.”

Siding with his bandmate Ian Gillan, Paice took a similar stance as the singer but with less scathing words, commenting on their snub so far stating, “The Hall Of Fame should be embarrassed for not inducting us already. Look at some of the non-entities who’ve got in. I won’t name them, but just have a look at some of those names, and you’ll know who I mean. What have they ever done for rock ‘n’ roll? Nothing. Having these artists in before Deep Purple undermines what it is supposed to represent.”

In October earlier this year, Gillan slammed the Rock Hall and took a shot at those who had already been inducted, exclaiming, “I’m sure that my mum would have been pleased and it all sounds very grand, but just take a look at who’s in it. I once wrote a song called ‘No Laughing in Heaven’ which was about not wanting to go to heaven due to the company I’d be keeping, and with a few exceptions, the Hall Of Fame is pretty much the same thing.”

In addition to Deep Purple, the 2016 nominees include the Cars, Cheap Trick, Yes, the Smiths and Steve Miller, N.W.A., Janet Jackson, Chicago, Chaka Khan, Chic, Los Lobos, the J.B.’s and the Spinners.

Open Letter to the Rock and Roll Hall of Fame