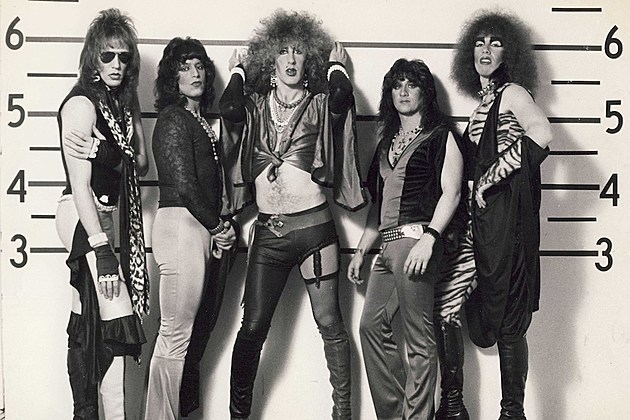 We recently had the pleasure to speak with the legendary Twisted Sister frontman and undisputed king trash-talker Dee Snider. Turning back the clock, he discussed the new documentary, We Are Twisted F***ing Sister!, which focuses on the 10 years the group spent playing as a full-time bar band before finally making good on their promise stated in “We’re Gonna Make It.” Look for We Are Twisted F***ing Sister! on DVD and digital download on Feb. 23, and check out our interview with Snider below:

With We Are Twisted F***ing Sister! focusing on the decade of you guys being a bar band, what’s it like for you personally looking at all that footage as Twisted Sister prepares their farewell and seeing everything come full circle?

Personally, it’s really nice somebody tells the story. There’s a hope that in this day and age that documentaries are not just a dead letter box. Netflix, for one, has completely opened that world up. People actually have access to documentaries and are watching them. It’ll be great to have that story told because it’s so unknown to so many people.

If you’re from the Northeast, there’s a reference and understanding of the importance of Twisted Sister. That’s why you’ll see bands like Cinderella and Bon Jovi, Kix and Poison, Anthrax and Overkill. When they talk about Twisted, it’s like they’re talking about somebody that’s in their band. People from the West Coast, and overseas and South America, they get confused — ‘this is the band with two songs?’ The bands I mentioned, growing up in the Northeast, they were aware of the Twisted presence and the Twisted influence over these bands. So many of them would get in line with thousands of others to see Twisted Sister in a bar or a club, packed to the rafters to see this band. It’s great for that story to finally be made available.

Not a lot of people realize, even when you put out Under the Blade you had a record deal, but there wasn’t a lot going on for you guys. You had an album out and had been to England but you still had that bar band status back home.

That sort of became the start of the story over there. Still, those few first albums were just a Northeast thing. There’s one story — a guy named Jack Irons, I don’t know if you know him — drummer from Red Hot Chlli Peppers, went onto play with Pearl Jam, and we were talking one day, we were having a conversation because the Chili Peppers were around for quite a while before they broke big. The Twisted story came out and he literally stopped — ‘Wait, you guys were together for ten years?’ I was like, ‘Yeah.’ His whole face changed and everything. He goes ‘Dude, we thought you were one of those bandwagon bands like Motley [Crue], ’80s bands started happening, Ratt and then Twisted Sister came out, Quiet Riot… You put on the makeup, came out there and did your thing. The fact you’ve been around for ten years just changes the entire story.’

You were a glitter rock act, and you were a carryover from the early ’70s with all the Bowie and everything like that and you weathered the storm.

We just waited it out, [laughs] it changes the story for people and I hope people get to hear it.

Not a lot of bands have a story like that to tell. During those days, you and Jay Jay French were constantly engaged in a mental battle. Sometimes whether he knew it or not, and he kind of drove you to become who you are today at least within Twisted Sister. Would you say that playful tension between you has died down after the last 40 years or are you still out there trying to prove something to him? You note it in the documentary that you still haven’t been accepted as the lead singer yet.

[Laughs] He actually, post-screening, came and said, ‘You’re in the band!’ [laughs].

Well, congratulations, Dee, you made it!

He didn’t realize. He was older and cooler and had been doing Twisted for a few years, he was a New York City guy and I was this Long Island bro. I realized he wasn’t intentionally being a dick. You know, a natural dickishness between the stupid… and I was a rube. I was a 20 year old from Long Island.

I remember I was afraid to go to NYC to go pick him up. We were picking him and Eddie [Ojeda] up and Eddie was in the Bronx. I was s–tting in my pants. I was a suburban kid, and I’m in the Bronx!? In my book [Shut Up and Give Me the Mic] I talk about it at length. It was like, going to meet these guys was terrifying. I was the new guy and they treated me like the dorky new guy, which I was. It was a mistake, I would’ve been better off if they had been kinder, but I realized, now, they weren’t trying to f–k with me, it was just the way it was. I think I made my point, loud and clear to everybody. I wasn’t a dick, I wasn’t a dork. I am the man and you will treat me as such, dammit!

In the documentary, it routinely circles back to Twisted Sister’s enemy being dicso. You guys even burned the original Saturday Night Fever sign from Grease. Is there any music of today that you would consider the enemy of rock ‘n’ roll?

I’m a lot more understanding. I’m older and wiser, but I’m still a terminal headbanger. I just like it heavy and I like it hard. Oh that’s what she said! I was just drawn to it. Rob Halford said ‘Being a headbanger is like being a marine, once a headbanger always a headbanger.’ It’s true, it’s just something in your blood, even when you get old. Is there a mortal enemy of heavy metal and hard rock? …I don’t think so. I was going to say the record industry itself, but it’s the mortal enemy of music in general. If anything, I think heavier music thrives better than lighter music in there.

So nothing you’d say is the mortal enemy of rock right now. Do you like disco now that you’re older and wiser? 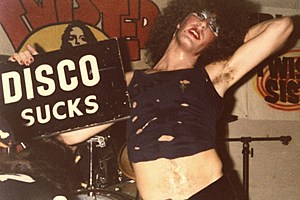 You know, Connecticut is not far from the West Coast. Short plane flight because I’m gonna punch you in the mouth for saying that, you know [laughs]. Disco still sucks! [laughs] You look back on it and it’s a curiosity at best, but no, disco sucks!

In the documentary we get some rare footage of you without your iconic, bleach blonde hair. Has there ever been a part when you haven’t bleached that since you started in the mid ‘70s?

My wife Suzette, she’s been there and very influential. She’s been largely responsible for a lot of the dramatic changes in my physical appearance. Not that I didn’t want to wear it, I was wearing rudimentary makeup when I met her, but she’s always been like, ‘You can do this better. Have you thought about wearing lipstick?’ I said, ‘No, I’m not wearing lipstick! I’ll just try some gloss, okay? I’ll put a little gloss on.’ She gives me this little tray with a line of lipstick going from gloss clear, slightly darker beige all the way down to blood red. So I run out of the gloss and think ‘Well, I’ll put on the beige it’s barely anything.’ You can figure out the rest, by the end of the month I was wearing red!

That’s how it stayed. I was her crash test dummy. She’s always said I wanted to do something and she just helped me do it better. With the hair she’s like ‘Hey, why don’t we put a couple of streaks in there?’ ‘I’m not putting streaks in my hair!’ ‘Just a couple! Highlights! Nothing!’ ‘Okay…’ A couple streaks stretched to a bunch more streaks turned into solid blonde bleached hair by 1979 and I love it. I still bleach it. Point being, she’s guided me down this path and it was the right one.

There was even a time where you wore the same outfit as her at a show, right?

Yeah, that was her starting to making costumes for the band. Yes. You’re 15, you go down to the show and your boyfriend is onstage wearing the same top and pointing to you from the crowd because he’s very excited that he’s wearing your tops. I remember I walked off and she said, ‘Why did you buy the same top as me?’ I said, ‘I told you I loved it and asked where you go it, remember?’ [laughs] She thought I just liked the top, she didn’t know I wanted to own the top. So, shortly after that she started making costumes.

If you listen to the Marquee Club bootleg (March, 1983), you guys are raw and abrasive like a punk band. It really lets the bar band the documentary focuses on shine through on that one.

Those Marquee shows, people only have the music to judge us by, no one had seen us. It was a very confused audience. It was filled with metalheads, skinheads, mohawk punks. People looked around going ‘Wait, you’re here to see Twisted Sister?’ We were very… in with the punk community, we were heralded by many punk bands who aren’t punk anymore – bands like Green Day, Rancid. I say they’re not punk because they say once you become a millionaire you have to turn your card in. A lot of those bands, and speed metal bands. A lot of these more aggro bands who knew, who got inspired and turned on by Twisted Sister. That’s what I love about the movie, it gets people to know more about who we really are. Beyond the makeup, the videos and a few hit songs.

And to realize how serious you were, too.

Oh yeah! We had a great sense of humor, but we were as serious as cancer. If you’re from the Northeast you have a different view of Twisted Sister than the rest of the world. There’s a disconnect, people don’t understand why bands like Cinderella, Overkill, Anthrax, Poison, Kix, Bon Jovi… they’ll talk reverently about Twisted Sister because they were in those bars. They were studying and learning, watching and the rest of the country had no access to that. They say ‘Oh yeah, I saw that video it’s funny. I like that song, catchy tune!’ So this, again, gives us a chance. The VH1 Behind the Music, and you see it and they interview people like Richie Sambora [guitar, Bon Jovi] where he’s talking about Twisted Sister, and I know people are going, ‘What? Twisted Sister?’ He used to be one of those kids coming to the clubs to see the band and get inspired.

Thanks to Dee Snider for the interview. Be on the lookout for Part Two of our discussion about the deaths of Twister Sister drummer AJ Pero and the iconic Lemmy Kilmister who played a significant role in the band’s success. Again, ‘We Are Twisted F***ing Sister’ is out on DVD and digitally on Feb. 23.

Watch a Trailer for ‘We Are Twisted F***ing Sister’