The album was recorded at City Of Bones Studio with Dennis Ward (Unisonic, Eden’s Curse, Krokus). The artwork’s been created by Samoth Gorwath, who also produced the album.

The band will go on extended They will also embark on the extensive “DEBAUCHERY vs. BLOOD GOD Tour” in 2016/2017. You can look forward to a musical journey through the 13-year-long band histories – Blood ‘n’ Roll galore!

DEBAUCHERY vs. BLOOD GOD’s new album “Thunderbeast” will be released on July 15, 2016 via Massacre Records. 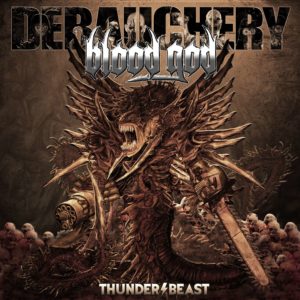