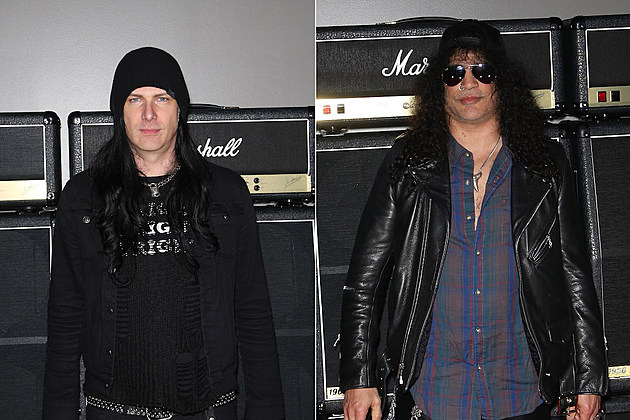 Slash has spent the last several years with Myles Kennedy and the Conspirators, releasing albums and subsequently touring the world in support. Now having officially rejoined Guns N’ Roses after months of rumors, it has put his solo career on hold, leaving the members to pursue their other musical ventures for the time being. Conspirators bassist Todd Kerns posted a lengthy statement on his website, reflecting on his bandmate rejoining GN’R, new doors that have opened and the death of iconic singer Scott Weiland.

“By now you will have been privy to news that is hardly unexpected yet wholly exciting nonetheless. God knows it never seemed to be that carefully kept a secret,” began Kerns. “For a long time now we Conspirators have been personally made aware that the regrouping of one of the most important brotherhoods in music history was underway,” the bassist continued, noting, “That thing that everyone had wished for but never thought possible was quietly (and not so quietly) cooking under our very noses. To be in this close of proximity to a history of rock ‘n’ roll moment occurring has been nothing short of incredible.”

He goes on to detail how he has never seen Guns N’ Roses in any incarnation of the group and discusses other musical idols he missed either because he was on tour since his teenage years or because of the small town he grew up in. Excited at the news, he said, “Now I know a guy and I hope to see this reformed unit in person. The effect of Appetite [for Destruction] is in my very DNA. It changed so much for me. It changed so much for most of us who love rock ‘n’ roll.”

Though it means suspending the opportunity he has had to tour with one of his most influential musicians, Kerns couldn’t be happier for Slash, commenting, “As Slash’s bro I think this is a very exciting and important chapter for him to embark on. I support him wholeheartedly to dive into this experience but as his friend I would support him if he decided to walk away from music and live amongst Buddhist monks in Nepal.”

The break also means Kerns will have time to work on his other project, TKO. Over 15 years in the making, the debut record will finally come to light. The bassist’s PledgeMusic campaign indicates that his writing partner over the last decade and a half is Zuckerbaby’s Reed Shimozawa. Some of the material appeared on Kern’s solo album, Go Time! as well.

Later in the post, Kerns reveals discovering the passing of Scott Weiland after band rehearsal one night. Reflecting on the successes of Weiland, he said, “He was one of the most talented frontmen in the history of rock and I feel blessed to have managed to see him perform a number of times over the years. He had a true knack for melody and really had a colorful thing or two to say in those songs.”

Having played Velvet Revolver songs on tour with Slash, Kerns felt a personal connection to the singer, saying, “Not a night has passed that we didn’t play ‘Slither.’ ‘Fall To Pieces’ weaves it’s way in and out of the set and no song could be more poignant in light of his passing. That song is nothing short of a cry for help.” Kerns concluded his thoughts on the former Stone Temple Pilots and Velvet Revolver frontman, stating, “Goodbye, Scott. I imagine him finally free of all that cursed him.”

Guns N’ Roses have been confirmed as one of the headliners of the 2016 installment of the Coachella Festival. Along with Slash, bassist Duff McKagan has rejoined the legendary group. That Metal Show host and rock radio luminary Eddie Trunk also stated there are rumors that Steven Adler is negotiating for a role in the reunion of some of the band’s classic lineup.