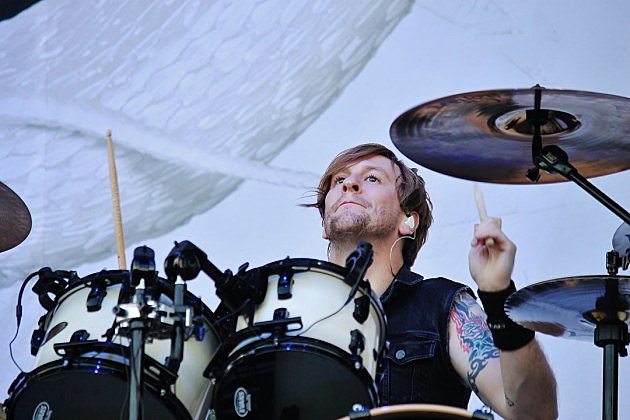 Bullet for My Valentine have been relentless in support of their 2015 release, Venom. They’ll be hitting North America as headliners with fellow Brits Asking Alexandria and While She Sleeps by their side, but one familiar face will be absent on the trek. Longtime Bullet drummer Michael ‘Moose’ Thomas will not be taking part of the “British Invasion” tour as he and his wife are expecting their first child.

Bullet for My Valentine announced the news on their Facebook page, standing fully committed behind their drummer’s decision. They also took the opportunity to revealed Jason Bowld will be his temporary replacement. The statement reads:

Our brother Moose got the wonderful news late last year that he and his wife are expecting their first child together, which I’m sure you’ll join us in congratulating them on!

In light of this, Moose has made the decision that, after 10 years of non-stop touring, he’s going to take a few months out to be at his wife’s side around the birth. We support him 100% in this, and we thank our good friend Jason Bowld for agreeing to step in on the drums in the meantime.

Our touring cycle will remain unaffected by this, and Moose will be back in the hotseat later this year ready to kill it again!

Bowld has been part of Pitchshifter since 2000 and has filled in on tours for Killing Joke. The stickman also shares a band with Bullet for My Valentine’s Matt Tuck in AxeWound, so the fit should be perfect while Moose and his wife await their child’s birth.

Venom reached No. 8 on the Billboard 200, marking the third highest U.S. chart position the band has attained in their career. “No Way Out,” “You Want a Battle? (Here’s a War),” the title track and “Army of Noise” are standout cuts from the disc, adding to an ever-growing list of must-hear classics from Bullet for My Valentine.