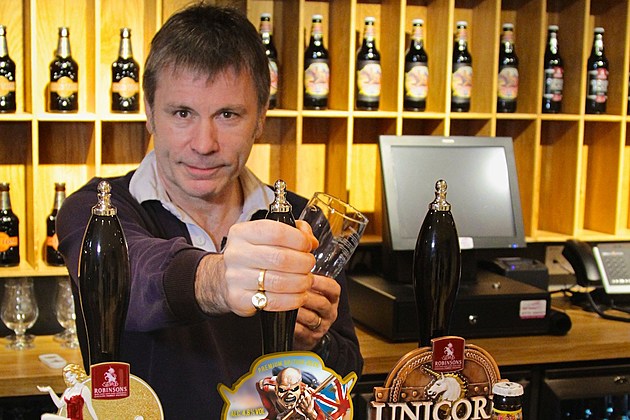 They say a résumé should only be kept to one page, but if you’re Bruce Dickinson one page is hardly enough to detail all your professional accomplishments. With a busy year already lined up between a worldwide Iron Maiden tour in support of The Book of Souls and an autobiography to write, the singer found some empty space to pencil in time to craft another Maiden beer!

After unleashing Trooper ale in May of 2013 and a “supercharged” version last year that raised the ABV to 6.6 percent, Dickinson will be trying his hand at another beer that is “somewhere between a stout and a porter.” No, that is not the name of the beer, though it could serve as a clever play on the band’s sixth album Somewhere in Time. With no name yet, we’d like to suggest “Porterslave,” “Seventh Stout of a Seventh Stout” and “The Loneliness of the Long Distance Drinker.”

Once again, the signature beer will be a joint venture between Iron Maiden and Robinsons Brewery in England. Initially, the idea was for Maiden to slap their name across a bottle of red wine, but the frontman had other ideas, stating, “We said why would we want to do that? But it gave us the idea of doing beer instead. [I] selfishly wanted it to be the kind of beer I liked: a traditional English cask ale with lots of flavour but you can drink a few of them without falling on your arse.”

Dave Shack of Maiden’s management company Phantom Music Management said, “This isn’t a cash grab. This isn’t about making millions of pounds from beer. This is about making a quality product that corroborates the band’s position as a great British export and a very proud British institution.” The plan is to release one seasonal or limited edition brew every year as they try to find a second permanent staple to stand next to Trooper Ale.

Trooper Ale has sold over 10.4 million pints since its launch and its two varieties account for over 50 percent of Robinsons Brewery’s production volume.

Iron Maiden will kick off their world tour in Florida on Feb. 24. For list of North American dates, check our 2016 Guide to Rock + Metal Tours. Dickinson will be piloting a new version of Ed Force One as the band, crew and gear will all make the trek on the band’s new jumbo jet.

Bruce Dickinson Has Half of New Solo Album Written