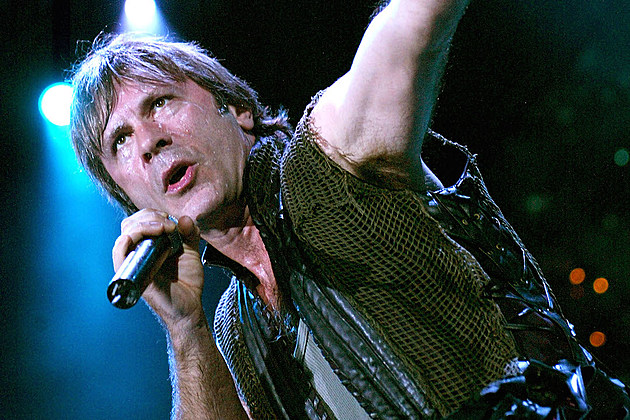 Bruce Dickinson is once again making everyone feel lazy. As Iron Maiden gear up for the start of their 2016 world tour in support of The Book of Souls, the high-flying frontman has confirmed he has already made some significant headway on his seventh solo effort. As he told Loudwire in our exclusive interview back in September (video below), the singer reiterated that he has about half an album written.

Speaking with Classic Rock, Dickinson spoke about his preparation for Maiden rehearsals and touched upon how his solo work is readying him for the task. He said, “I’m looking forward to getting stuck into some sensible rehearsals. I may even sneak off and do some solo songwriting because I’ve got half of an album on the blocks.”

Dickinson continued, “‘If Eternity Should Fail’ was originally intended as one of its tracks. But it could be a cool, relatively unchallenging way of pre-warming up the voice before I go into Maiden rehearsals. So making some noise that way first could be a possibility.”

“If Eternity Should Fail” is the first track off the newest Iron Maiden record and is the first song the band has played in Drop D tuning. The synthesizer part that opens the song was even recorded with Roy Z — Dickinson’s solo writing partner — and was kept in tact on The Book of Souls.

The last time fans were treated to a Bruce Dickinson album was 2005’s Tyranny of Souls, which included the singles “Abduction” and “Soul Intruders.” Tattooed Millionaire was the first release under his name while he was still in Iron Maiden, but he departed in 1993 to pursue his solo career full time. After two more albums, Roy Z convinced Dickinson to return to the heavy metal format and Adrian Smith — who had left Maiden in 1990 — joined as well. With Accident of Birth and The Chemical Wedding under their belts, Dickinson and Smith returned to the Maiden fold in 1999.

A man of many hats, Bruce recently announced he is working on an autobiography which is tentatively slated for a Fall 2017 release. Commenting on the opportunity, the engaging frontman said, “It was flattering to be approached to write a book about my experiences and it seems an appropriate time to do this as I will have plenty of time on tour next year to work on a book. I am sure flying the 747 out round the world on tour will add to the tale with some unusual scenarios!”

Bruce Dickinson Talks The Book of Souls + “Empire of the Clouds”