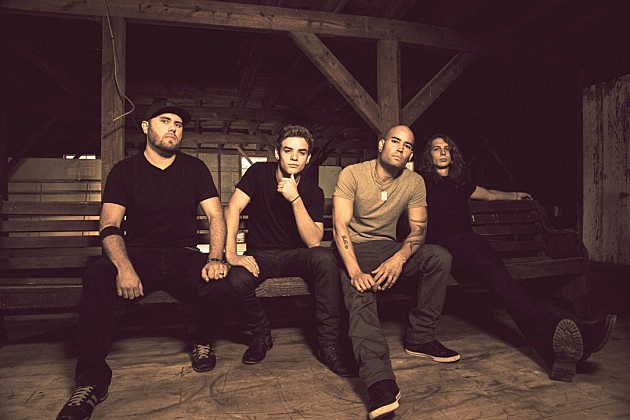 Bridge to Grace have been toiling in the rock scene for a few years now, but appear to be ready to break through with their new album Origins, out today (Aug. 28) via Long Run Records. The band just released their new video for the current single “Everything” and have plenty of shows on the horizon. Loudwire recently had a chance to chat with drummer Justin Little about the disc, touring, the “Everything” video and more. Check out the interview below.

Congrats on the new album. Take me through what this period has been like for you between laying down the final note on the album and waiting for the disc to drop. Have you had time to take a breath or do all the things like touring and promotion keep you occupied?

We are super stoked to finally have the album coming out! Origins was recorded over the past three years, with the final couple of songs finished only a few months ago, so it’s kind of a complex answer. We’ve had the majority of the album tracked for a long time, so waiting to release those songs has seemed like forever. We decided to track a few more songs and make it a 17 song album and then remixed and remastered the previous songs as well… So what was once a very long period of waiting for the right time, the final months have turned into a quick sprint to get everything together.

We are very proud of this album and think it showcases the band really well. We had a bit of a breather once the album was finished, but we like to keep busy. We are out on tour now and hope to stay out on the road for the rest of the year and into 2016.

Fans are now getting a chance to hear “Everything” off the album. Tell me a bit about that song and where it comes from or anything that stands out from recording.

“Everything” means a lot to us and it was actually one of the first five songs that we recorded. Basically the meaning behind the song is a power struggle between yourself and another. It doesn’t necessarily have to be a girl or another person. In my eyes, I see a power struggle with addiction. Someone who gives everything to drugs and knows it’s ruining their life but they can’t stop. We love to write songs that can be interpreted in many different ways. We pour ourselves into the music and hope it resonates with the fans.

There’s a new video for “Everything.” A very dark video in terms of subject matter. Can you discuss what the video is about and what is your thought on how the clip came out? I have to say, I love the slow motion performance shot of your synchronized jump.

The video for “Everything” was a lot of fun to shoot and we’re really happy how it turned out. In the video, you see a girl who seems lost and you also see a guy who is clearly angry and upset. When everything ties together at the end you see how they were a couple and the girl had been struggling with an addiction to heroin. We wanted to show how drugs and other addictions can tear people apart who care about each other. I’m also glad you love the jump shot because it took us like 10 takes to get it perfect!! (laughs) … Our director Jon King is great to work with and was a big help in getting our vision for the song to come out the way we wanted it to.

Even though this is a pretty good size track listing for a debut album, some of these songs are holdovers from a past release. I know “The Fold” in particular was big in helping you build your audience. Can you talk about that song and what it meant in getting your career off the ground?

Yes we have previously released an EP with five songs, including “The Fold” and four other songs which are all on the album. ‘The Fold’ is one of the first songs that we wrote together as a band, so when it was picked as our first single, we were excited. It is one of our heaviest songs, and also showcases the band’s dynamics. We were lucky enough that it did as well as it did, especially for a virtually unknown band at the time. “The Fold” and “Bitch” helped open doors for us at Active Rock radio, and we hope “Everything” takes us even further!

As you mentioned, you’ve had some time with this album and some songs are older than others. If there is a track on this disc that you think might be a jumping off point for future music, what would it be?

Yeah the album is a mix of older and newer songs, which was one of the reasons we named it Origins. It is a collection of songs written over a few years, so you can really feel the different emotions and themes as we started this musical journey. I think if I had to name a track that stands out as a newer direction for us, it would be either “Weapon” or “Left Inside.” They both have a slightly more intense vibe, and most of our newer songs seem to be in that vein. I’m not sure why we are writing more in-your-face type songs, but I think our fans will really enjoy these tracks.

Your band is pretty young, but you’ve hit the ground running and played some pretty solid support shows so far. What are some of the key things you’ve learned from some of the headline acts you’ve played with?

We’ve had some awesome experiences getting to open for bands that are huge influences on us. One of the first things we’ve learned is that being an opening band, the fans that are there for the headlining band might not (and probably don’t) know who we are, so we’ve learned to really interact with a bigger crowd and get them going and on our side without them necessarily knowing any of our songs. Another great thing is to see how these bands interact with their fans, and make it an experience and memory for them instead of just a rock show. Without the fans we wouldn’t have the opportunities that we’re getting now, so we take that very seriously. Taking the time with people that come out to see the show and treating them well is one of the most important lessons we’ve learned from veteran bands.

The band is back on tour with Full Devil Jacket in September. What’s your familiarity with the group and what are you looking forward to from the run?

We actually know the singer, Josh Brown, from playing in Jackson, Tennessee multiple times. He makes it out to every show he possibly can and really supports our band, as well as many other bands that come through that area. He’s a great guy to jam and hang with after the show and we are looking forward to hitting the road with him and the FDJ guys — their crowds are really fun to play for!

I saw on the Facebook page that you spent some time in the studio with Bob Marlette, who has produced many a great rock record. What have you been up to with Bob?

Yes Bob is an amazing producer, musician and songwriter. I can’t get into too much about our meetings with Bob just yet (hehe), but I can confirm we have definitely been at his studio recently and have started getting together some musical ideas that in my humble opinion are incredible as they start to develop. We are constantly writing and recording new demos, even though our debut album is just now releasing. We know that in order to craft great songs we have to always be writing and staying ahead of the game!

Also looking at one of your past posts … tell me about amusing yourself with parking lot games. The post mentions one with a racquetball and a Frisbee. Are there other games as well that help you pass the time on tour?

“Frisquet ball” was a game where we would toss a racquet ball (which we don’t remember how we obtained) to the hitter, who would wield a frisbee with two hands, and we marked three “bases” in the Wal-Mart parking lot, and in all honesty it was just half-assed baseball. We only got to play for around 10 minutes before we lost the ball under pallets of fertilizer in the outdoor section. Other than that, we pass the time playing Mortal Kombat and tossing a frisbee, hoping that Frisquet ball will one day catch on (laughs).

Speaking of touring, what have been some of the best and worst moments from the road so far in your career?

Depending on who you ask, one of the members pissing on another member in the middle of the night could be one of the best (or worst) moments on the road! And it’s funny, because some of the worst moments, such as being stuck in mud, having our wipers freeze on our windshield during a blizzard in Wyoming; dealing with a rogue bull wandering in a venue parking lot, and driving through Long Island in fear of having the roof of our RV ripped off by a low-clearance bridge turn out to be some of the best experiences and stories as a band. What doesn’t kill you makes you stronger, and also makes for great stories!

Favorite song to play off the album and why?

I think one of our favorite songs to play live is the first track off of our new album, a song called “Take It All.” We used to open our show with it but recently have thrown it in like the third song in the set. It is just a great live song and really gets the crowd pumped up, which fuels us to go even more frenzied on stage! Another great one live is “All I Want To Be,” mainly because it’s a fast paced “chanting” song that seems fans sing along to and is a crowd favorite. We tend to play it after our single “Everything,” which as you know is a more mid-tempo type song, so when we bust in with “All I Want To Be,” it’s like a strong punch to the face! In a good way, of course.

Anything special planned for release day? Will you go to a store or hop online to purchase your album?

We will be playing a show on our album release day in Kansas City, so the main plan for that day is to put on the best show possible and rock people’s faces off ! Other than really pumping the album via our social media sites and getting ready for our show, nothing big planned. I will say I have personally already pre-ordered the album, so once it uploads to my phone, I’m gonna throw on the headphones and listen to it from front to back! Not that I haven’t already done that, but now other people can do it with me at the same time, just in different places… We are so excited to share Origins with everyone!

As stated, Bridge to Grace’s Origins album is out now. You can order the disc via the band’s website or on iTunes. Look for Bridge to Grace on tour at these locations.

Bridge to Grace, “Everything”