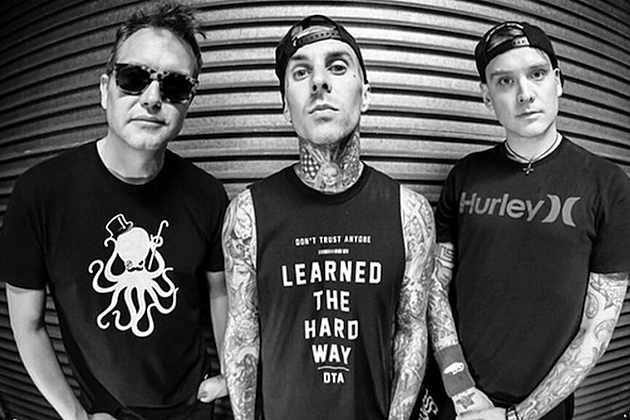 After Blink-182 guitarist / vocalist Tom DeLonge shocked fans again by walking away from the band, the boys from Blink recruited Alkaline Trio frontman Matt Skiba to fill the vacant spot. Lots of studio time has been put in by the new Blink lineup, and drummer Travis Barker recently revealed a new album could come as early as this summer.

Tom DeLonge’s sudden withdrawal from Blink-182 mirrored an incident from a decade earlier. Blink fell into a hiatus that time, but Travis Barker and bassist / vocalist Mark Hoppus decided to push forward despite DeLonge’s latest leave. With a handful of successful shows with Skiba already in the books, a new album is on the horizon.

“I’m excited,” Barker tells KROQ. “I don’t want to reveal too much. I don’t know how many songs we’re gonna write before we say ‘this is the group of 12 songs we’re putting on the album.’ We have 15-20 songs right now, but I really feel like it’s a process.”

Blink-182’s 2011 album, Neighborhoods, sold fairly well, but suffered creatively due to the members’ detachment from each other. “It’s awesome because we’re all actually in the studio, where we couldn’t get that with the old lineup,” says Barker. “It was impossible to get all three of us in the same studio. I think with a band you can’t just phone it in. You gotta be there. For that great chemistry and for everyone to really vibe you gotta all be in the same room. It’s just exciting. It’s a new chapter and we’re not striving for mediocrity, we’re looking to kill it. We’re gonna make a great album.”

Along with a potential album release this summer, Barker said there are some tentative plans for Blink-182 gigs to take place around the same time.