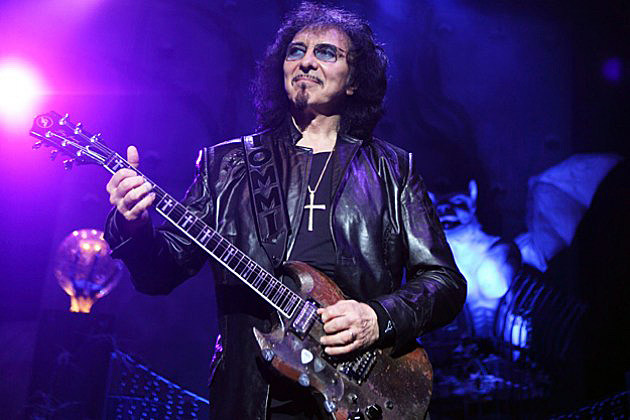 Black Sabbath guitarist Tony Iommi helped bring awareness to the loneliness felt by many people diagnosed with cancer at an event on Wednesday (Aug. 26) in Birmingham, England. The event was part of Macmillan Cancer Support‘s “Not Alone” campaign.

Iommi and others spent time in an isolation box (see below) that allows people to see in, but the person inside the box cannot see out. It’s designed to evoke feelings of isolation and loneliness that many cancer patients feel after they are diagnosed.

“When you get cancer it’s terrible because you tend to isolate yourself, and you can quite easily isolate yourself too much,” Iommi tells the Birmingham Mail. “Some people get frightened and locked in this box, and they can’t do anything because it is daunting. And it’s quite true, when you’re diagnosed with something like this, it really is a lonely time. To talk to somebody is probably the best therapy you can have.”

Iommi also talked about how he dealt with his cancer diagnosis in 2012 and how his Black Sabbath bandmates helped him. “As soon as they told me I’d got it, I went into shock and just thought, ‘that’s it, I’ve had it’,” Iommi says. “When you are diagnosed with it, you think of nothing else but ‘am I going to die?’,‘when I’m going to die?’ That’s the way you think.”

Iommi also says, “But doing the album [13] helped me in some ways because I had my friends round me, my family round me, and getting my mind off it, because you constantly think about it. It was really great, actually, and it brought us together so much. With Ozzy, Sharon went through cancer. He helped a lot, as well. He would tell me he’d spoken to Sharon about what she’d been through and he would give me advice.”

As to his current health status, Iommi tells the BBC that he is feeling well and looks forward to going to Los Angeles to work, presumably on Sabbath’s final album.

Tony Iommi: ‘I Could Be Here 10 More Years or One Year’