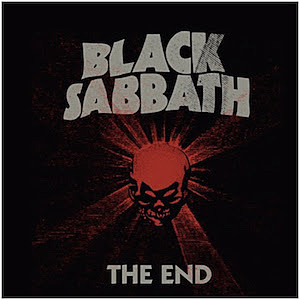 Will the world ever get a new Black Sabbath album? So far, the band has remained pretty consistent in stating there will not be a follow-up to the overwhelming success of their comeback album, 13. There is good news though! In celebration of their final tour, Sabbath will release The End, a tour-exclusive compilation featuring four never before heard studio songs from the 13 sessions. The disc will also boast four live tracks from three separate shows performed between 2013 and 2014.

With the addition of these four songs along with the four bonus tracks from 13, Sabbath wrote enough material in one session to span two albums. Guitarist Tony Iommi is known for starting from scratch when it comes to writing new records, so The End will serve as an unexpected bonus for their insatiable fans who only whetted their appetite with the 2013 disc. “Season of the Dead,” “Cry All Night,” “Take Me Home” and “Isolated Man” will possibly be the last songs the band etches into the annals of their storied history.

Each stop on the last run will feature artwork unique to the show and will be a special way for fans to commemorate their last time ever seeing Black Sabbath. With the advent of the tour kickoff just a week away, those anxious to see the band in action will get an early present tomorrow (Jan. 15) when the Birmingham legends unveil a behind the scenes look at the tour rehearsals at 10AM PT on their website and social media channels.

Fans remained hopeful that the farewell tour would feature the full original lineup including drummer Bill Ward, but the metal godfathers released a teaser trailer of their rehearsals and Tommy Clufetos is shown with the band. The drummer has manned the sticks for Sabbath since 2012, but was not featured on the 13 album.

For a full list of Black Sabbath North American “The End” dates, visit our 2016 Guide to Rock + Metal Festivals.