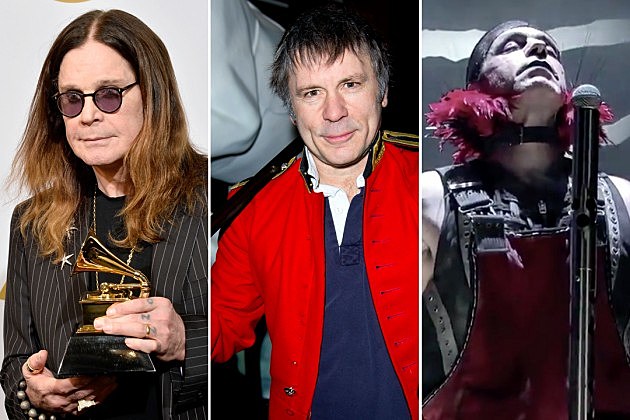 Frazer Harrison / Ben Prunchie, Getty Images / YouTubeThough the full lineup has yet to be revealed, the 2016 Download Festival in Donington Park, England is shaping up to be one of the metal events of the year. Organizers have just revealed the three headliners for the festival and they are Black Sabbath, Iron Maiden and Rammstein.

Sabbath will headline the Saturday bill on June 11 and the show is expected to be a special one as Sabbath will be partaking in their farewell tour during 2016. Ozzy Osbourne stated, “Download is my absolute favorite summer festival. It’s always like coming home. See you all there!”

Iron Maiden will have the opportunity to close out the festival on Sunday, June 12. The band’s massive tour in support of The Book of Souls is expected to be one of 2016’s top draws.

Bruce Dickinson stated, “Download is a very special place for us. Not just because it’s always great to play on home turf but because there’s a truly unique vibe there, it’s the very heart of England and of Metal, so a fitting place for Iron Maiden! The crowd is always fiercely passionate and the whole band feeds off that famous Donington energy. We aim to deliver a really memorable show for our fans to close the 2016 Festival. Although this is our sixth time headlining at Castle Donington, it’s the first time we’ve been able to land Ed Force One right on the doorstep of the Festival site!”

As for the newly announced Friday (June 10) headliner Rammstein, there’s also plenty of anticipation for their return. Download talent booker Andy Copping stated, “Rammstein! In 2013 they delivered quite possibly the best Download headline performance ever! I know they will step up and deliver for us again. If you haven’t seen them before, don’t miss them – you will not be disappointed!”

The band recently confirmed that they were back after taking a bit of a hiatus to pursue outside projects. Rammstein are marking their return with the new Rammstein: In Amerika DVD featuring a reflection on their career and footage from their Madison Square Garden show, one of the biggest performances of their career.

It should also be noted that Download organizers have announced that a corresponding festival in France will take place the same weekend and that Rammstein and Maiden have been announced as the first two headliners. Tickets for both Download Festivals go on sale this Friday. Stay tuned to the Download Festival website for additional ticketing and lineup information.

Get Other Rock + Metal Festival News