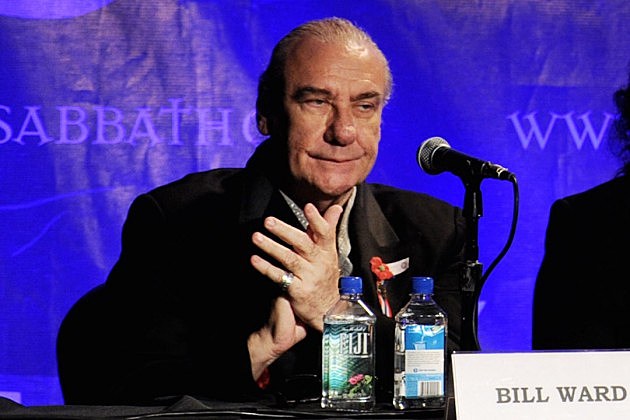 Estranged Black Sabbath drummer Bill Ward is continuing to talk about the dissolution of the relationship between himself and the band, especially Ozzy Osbourne. The drummer was interviewed recently by Eddie Trunk for his podcast and the host of VH1 Classic’s That Metal Show wasted no time in getting Ward’s thoughts on the matter.

On the drummer’s recent open letter war with Osbourne, Ward commented (as transcribed by Blabbermouth), “I was painted that I was physically unable to do it, and also, I was painted as having other motives besides wanting to play with the band. I mean, I was accused of a lot of things in those statements. And I was absolutely f–king furious.”

Ward’s relationship with Ozzy’s wife Sharon doesn’t seem to be any better. The drummer said, “It seems to me like Ozzy started out making those statements. I know that Sharon definitely dislikes me, and she has for a long, long time. And I also know that she is inside all these contractual things and these ‘unsignable’ contracts and everything else. She’s right there, right in the center of everything — as are the other lawyers as well, the other representatives.”

Ward went on to say that after his relationship with the band started to fall apart, he’s worked hard to disassociate himself from the group, which included not focusing on or enjoying Sabbath’s most recent album 13. “I didn’t think it was successful at all. Well, in terms of live attendance, I think it’s gonna go, ’cause the band’s really well known,” he told Trunk. “But I really didn’t… I was working on detachment — serious detachment — and I wanted to make sure that I went down the line and detached myself as much as possible. I had to stop loving them, because if you’re loving a dog as it’s biting you and ripping your insides out, it’s hard to love a dog that’s doing that.”

He continued, “So I actually stopped loving them, and I had to learn what we call detachment. So whatever they were doing, I could care less. I wasn’t interested in the f–king album ’13′. I’ve heard twenty bars of it — that’s all I’ve heard — and then I turned it off and said, ‘That’s a pile of s–t,’ and that’s the truth. And I couldn’t care less what they were doing on tour.” Black Sabbath’s 13 came out in 2013.

The drummer recently released an album called Accountable Beasts with the Bill Ward Band and is also in a new rock trio that have begun creating their debut album.