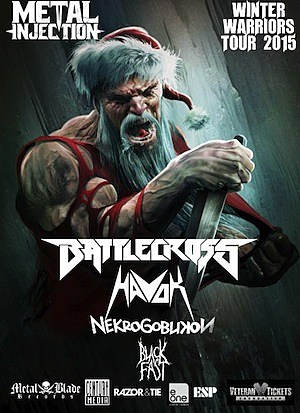 Battlecross have been road warriors in 2015 and have hit the pavement almost non stop since the end of May. Their upcoming Winter Warriors 2015 tour with Havok, Necrogoblikon and Black Fast will be to honor a different set of warriors. Teaming up with the Veterans Ticket Foundation at vettix.org, the tour allows armed forces member to obtain free admission to the show. The 2015 run marks the second installment of the tour headlined by Battlecross.

The tour will launch in Pittsburgh, Pa. on Dec. 11 and will come to a close one week later on Dec. 18 in Flint, Mich. Tickets will be on sale starting tomorrow, Nov. 11 and for service members, on Nov. 17 through vettix.org.

The Michigan natives will also be honoring veterans through their Twitter page and are accepting submissions of loved ones from fans at smarturl.it/honoravet. The submissions will be used to give a shout out on the Battlecross Twitter page to members of the military.

Battlecross have been on the road extensively this year, providing support for Crowbar on the Summer of Doom tour and have been opening for GWAR on their lengthy U.S. run which will draw to a close on Nov. 28 after 77 stops. The Winter Warriors tour will see the band play a headlining set supporting their latest release, Rise to Power, which was released in August on Metal Blade. The album peaked at No. 103 on the Billboard 200, marking the highest charting of their four albums.

To see a full listing of Battlecross tour dates, visit the band’s website.

*Battlecross and Black Fast only

50 Best Metal Albums of All Time