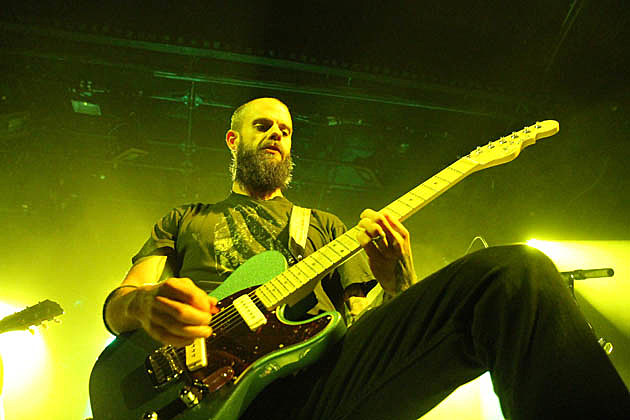 Baroness frontman John Baizley was the guest on Full Metal Jackie’s weekend radio show. The musician spoke about the band’s new ‘Purple’ album, the effect the band’s 2012 bus crash had on how he approaches music now and more. Check out the interview below.

How are you my friend?

Thank you so much for being on the show. The new album, Purple, is out now. John, your life was disrupted by severe injury caused by a tour bus accident in 2012. Did the most difficult moments of regaining use of your arm and trying to be able to play guitar again give you greater determination or cause greater despair?

Most definitely greater determination. There was initially a moment of despair, but once we all realized there was a surgery I could take on that would hopefully fix me, and once I got out of surgery and saw that fingers were moving, arm would recover, we made it our goal. I think at the time Pete and I had no idea whether or not it was gonna work well or be difficult. We didn’t understand the nature of what was going to happen, but we just kind of played it by ear and set ourselves a task. You just muscle through it, you know.

How did the injury to your arm force you to play guitar differently than you did before. Did that directly affect the difference in the way you put together songs for Purple?

The really miraculous thing about the whole thing, primarily the way the surgery worked out, was where there were so many things that had become difficult or impossible for me that those muscles and tendons and nerves that I need to play guitar have largely been left intact. It could have gone either way. All the surgeons and doctors were very reticent, to say the least, to give me hope for functionality, but I’ve got it. It hasn’t changed the way that I physically play guitar. I probably have to be more careful onstage now, but as far as writing and playing and being able to use my instrument, there’s really no difference.

Mentally, why is being a songwriter such a neurotic process for you?

Because I’m a neurotic person. [laughs] I’ve learned over the years that the best way for me to handle and manage my various neuroses and obsessive-compulsions is to create things. It’s a way to take something that can be negative, and can be potentially a destructive force, and turn it into something positive. It’s just that simple. I just put all that energy that would otherwise have to go somewhere arbitrary, and I try to focus it into music. Music is therapeutic for me. It’s the place where I can deal with all of that stuff.

Literally or metaphorically, music reflects life. Are the ways the last three years have affected the songs on Purple intentional or subconscious?

Probably both, but it was apparent from the beginning that if we made an attempt or an effort to avoid dealing with the subject of the accident we were involved in, it would almost be preposterous to think that we could write content that avoided that. But having said that, we didn’t focus on it, either in rehearsals and while we were writing. We actually never even talked about it. It’s in the lyrics, and it probably informs to a certain extent the way that we write music, but it wasn’t the focus, it was the reality.

The general rule of thumb for Baroness when writing a record is that we are going to tackle subject matter that’s happening while we’re writing. It just so happened that literally that was the recovery, recuperation, all that from the accident — the mental, physical, spiritual, psychological, everything — that was what was happening through that process, and so it was relevant to the record. But fortunately, and I really, really mean this, our new rhythm section was not part of that, and so we didn’t have to be 100 percent focused on it. We found a balance, and that was the way that we were able to take something really destructive and terrible and something which had a tremendous potential to put one or all of us in a dark place, and we were able to balance that against the positivity and the lightness, levity, an elevated level of energy and enthusiasm. And by blending the two together, not only did it serve the purpose of being somewhat therapeutic for me, but it gave the record a flavor that we couldn’t really draft.

We couldn’t conceive that and attempt that any other way. It was just the confluence of all those things happening at once — the new members, the accident, the injuries — but also our determination to not become dark about it. To prove that we could move through something like this, get past it in time, but give it healthy respect.

Matt and Alan left the band, making way for Sebastian and Nick on drums and bass. What’s the most noticeable difference between Purple and the rest of your releases before those guys joined Baroness?

The way we write music is collaborative. As each person contributes their 25 percent, so having 50 percent new personality means that there’s going to be a shift in the presentation in the way we approach things. While they weren’t — it was a matter of balancing the history of what we’ve done versus what we intend to do in the future. With Baroness, our goal is to continually push ourselves forward and continue to have doors open musically speaking. New directions to head, so having new members with different backgrounds with different skill sets allowed us to write music that was style driven, extra atmospheres and an energy that we just didn’t have before because it was a different combination of people. The only thing that we really need to make sure of every time we had a song is that it sounded like a Baroness song. And as long as that was the case, and that was always the case, we were happy with it. I think there’s a different level of variety and a new level of sophistication. Most notably, for me, it’s just … it feels like a very enthusiastic record.

Yeah, it’s been my pleasure Jackie.

Many thanks to Baroness’ John Baizley for the interview. You can pick up the band’s ‘Purple’ album via Amazon and iTunes and catch them on tour at these stops. Find out where you can hear Full Metal Jackie’s weekend show at this location.