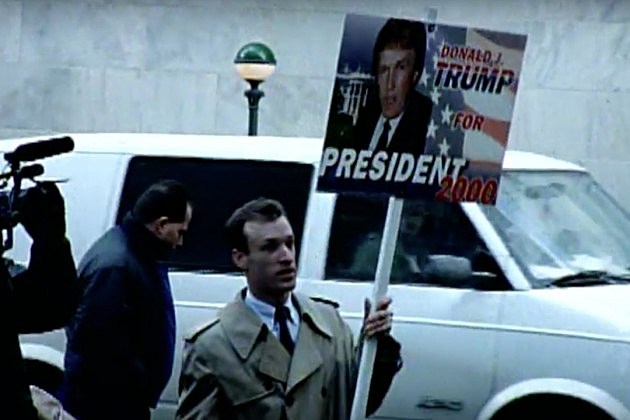 It’s “Back to the Future” Day, the day that Marty and Doc fly to in their souped-up time traveling Delorean in Back to the Future II and uncover many of the advancements in society. But while you ponder how things have changed since the film was made and wonder where your Hoverboard is or the likelihood of the Cubs winning the World Series (sorry, not looking good), you should realize that the film wasn’t the only prognosticator out there.

Rage Against the Machine also appear to be ahead of their time, forecasting the Donald Trump run for president back with their 1999 video for “Sleep Now in the Fire.” The Michael Moore-directed clip found the band storming the New York Stock Exchange and earned them a MTV VMA nomination for Best Rock Video, but a closer look unveils a very savvy prediction.

The screen capture shown above finds a man walking the streets with a campaign sign promoting Trump’s run for President in 2000. Though they were a few years off and Trump has toyed with the idea for a presidential run in the past, his decision to go for America’s top political office finally came to fruition here in the year 2015.

The prediction was probably not all that much of a reach even back in 1999. At the time, Trump had thrown his hat into the ring, attempting to lead the Reform Party. However, Pat Buchanan eventually won that party’s nomination for president and eventually lost to George W. Bush.

Still it is interesting to see the politically-minded rockers showing that much foresight. Watch Rage Against the Machine’s “Sleep Now in the Fire” video in full below.

Rage Against the Machine, “Sleep Now in the Fire”

Top 10 Rage Against the Machine Songs

Rage Against the Machine’s Tim Commerford: ‘We Are Still a Band’