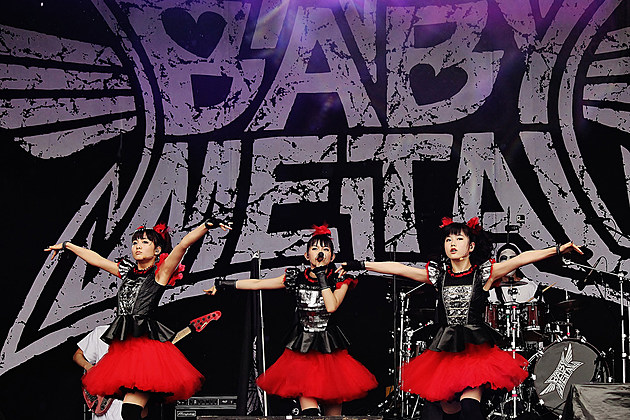 Get ready for the second wave of Japanese idol metal sensations, BabyMetal! Following the massive success of their self-titled debut along with their dazzling choreographed live shows complete with as much pyrotechnics one could ever hope for, the band are poised to release Metal Resistance on April 1 on earMUSIC.

It waits to be seen if “Road of Resistance,” the only music BabyMetal released in 2015, will appear on their sophomore release. The song was a more mature effort, straying from the typical childish themes that dominate songs like “Gimme Chocolate” and “No More Bullying.” The music has struck a variety of fans, including those who don’t traditionally listen to heavy metal, which has irked some of the more die-hard metalheads. The title can be interpreted as a play on this, stating BabyMetal are here to defend the genre against any attacks.

Commenting on the forthcoming album, Su-Metal stated, “I will be putting my everything into the production of our upcoming album because I believe that many of you are waiting for it. We are looking forward to meeting our fans abroad again at Wembley Arena right after the release of our second album, so you can expect to hear our new songs for the very first time live there.”

The band’s world tour in support of Metal Resistance will begin the day after the album’s launch at London’s legendary Wembley Arena, as Su-Metal discussed, and will come to a close at Japan’s Tokyo Dome, though no final date has been given yet. Su-Metal continued, “Performing at Tokyo Dome [this] year still feels like a dream, but I am going to work towards building up my confidence to stand on that stage and I hope to continue growing through our upcoming world tour.” Echoing her bandmate’s sentiments, Moametal added, “I still can’t imagine that that day would come, when we would perform at Tokyo Dome. On top on that, our new album will be released on Fox Day, so I promise you that we will come up with an album that will betray your expectations — in a good way, of course.”

The band’s producer and visionary, Kobametal discussed the anticipated record, stating, “I continue to believe that the songs of BabyMetal continue to push them forward to discover new possibilities.” Adding more about building on the group’s success, he said, “Since the release of BabyMetal’s debut album in 2014, we have been racing across the globe non-stop on our world tour. Through the last tour I have come across people from all over the world and have had the chance to feel that miraculous moment when everyone came together via BabyMetal.”

BabyMetal have already announced a small run of U.S. tour dates as they plot a triumphant return stateside. The group also picked up three wins in the 5th Annual Loudwire Music Awards for Best Metal Song of 2015, Best Live Act of 2015 and Most Devoted Fans.