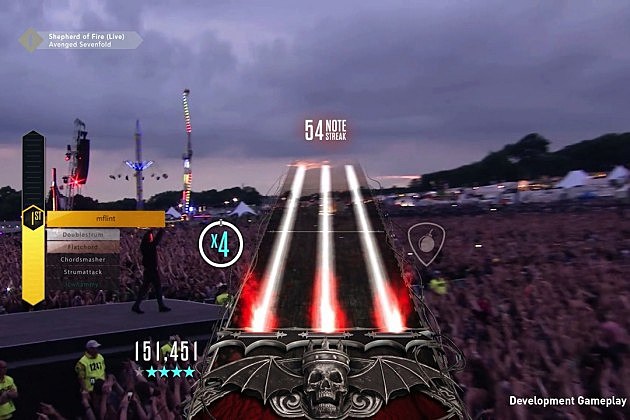 Guitar Hero is changing it up drastically with the brand’s latest installment. Guitar Hero Live premium shows actually allow the fans to virtually step onstage with their favorite bands. With Avenged Sevenfold, players will be able to pick up their axes and jam “Shepherd of Fire,” Buried Alive” and “Nightmare.” Even better, they’ll play with Avenged in front of 70,000 fans at England’s Download festival, filmed especially for Guitar Hero Live.

Fans who pre-order Guitar Hero Live will be given instant access to this new Avenged Sevenfold content along with a custom notes highway and more. Check out a screenshot of the Avenged premium content above.

Guitar Hero Live will be released Oct. 20 on PlayStation 4, PlayStation 3, Xbox One, Xbox 360, and Wii U, and also Apple TV and iPad, iPhone and iPod Touch.

See How Old M. Shadows + Other Rock Stars Are in This Birthday Gallery