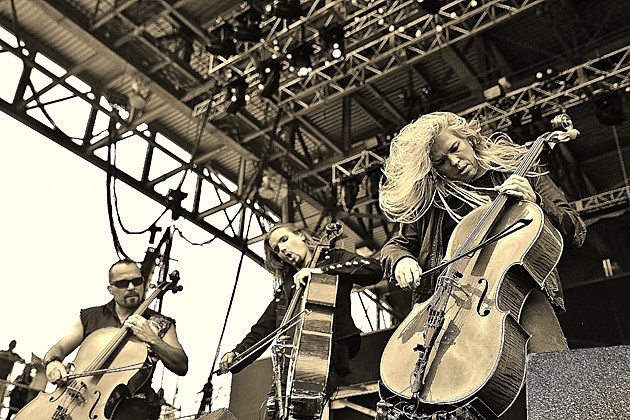 Everyone’s favorite Finnish cello metal band Apocalyptica will be making their return to the United States in April as they continue to promote their eighth studio effort, Shadowmaker, which was released in April of last year. Support on the trek will come from Tennessee rockers 10 Years and rising upstarts Failure Anthem.

Apocalyptica are celebrating the 20th anniversary of their first album, Plays Metallica by Four Cellos, which featured all cello interpretations of Metallica classics. The band has gone on to record original music, crafting one of the most unique sounds to emerge from the rock world. “It’s really exciting for us to return to the U.S. for another headline tour and we can’t wait to present a lot of new material from album Shadowmaker,” the band said about the upcoming jaunt.

Talking about their newly added frontman, they added, “Our singer Franky Perez, who is a real entertainer, will definitely bring an interesting new edge to our show for those familiar with our live set. We are looking forward to seeing old friends and making new ones all across the U.S.”

10 Years will be supporting a 2015 release, From Birth to Burial, which marks the band’s seventh studio disc. Failure Anthem, who put out First World Problems earlier this year, will serve as the opening act on each night of the tour. The trek kicks off on April 23 in Sayreville, N.J. and runs for a month, coming to an end on May 22 in Philadelphia, Pa. Tickets will go on sale Feb. 12 and Apocalyptica fan club members will have the chance to get tickets one day in advance on Feb. 11.