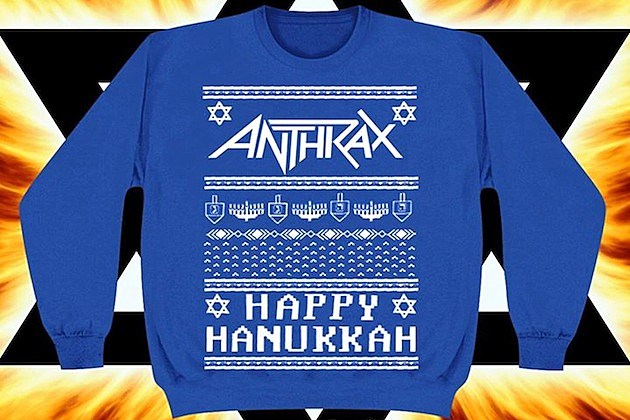 The holidays brought us another round of ridiculous and ugly holiday sweaters, including Anthrax‘s Hanukkah garment. It all seemed like harmless fun, but now the New York thrash natives are being sued for $1 million as a result. A Detroit, Mich. based artist and businessman has laid claim to ownership of the design he created (without the Anthrax logo at the top) in 2012 and cited an infringement upon his 2013 copyright.

Aaron Cummins, the man who created the design, has been selling it through his company, Wet House, according to the Detroit Free Press. In addition to filing the suit against Anthrax, he has named Rockabilia, an online rock and metal merchandising retailer, and Global Merchandising Services, an apparel supplier to Rockabilia, as well. The web retailer has been selling the Ugly Hanukkah Sweaters since November 2015, though were unaware of the infringement.

When reached for comment, Frankie Blydenburgh, a buyer for Rockabilia, learned of the news, stating, “This is the first I’ve heard that there’s any issue with it. We got (the sweatshirt) in November. It’s still on our site, but it’s a limited edition.” He passed the blame on the suppliers, adding, “It’s up to the merchandising companies we buy from to get the items cleared and make sure there’s no (copyright) issues.” He is also expected to reach out to the supplier to resolve the issue.

The plaintiff is not only seeking monetary compensation for damages to Wet House, but the cessation of selling, marketing and manufacturing all product’s with the copyrighted Hanukkah design as well as forfeiture of existing assets pertaining to the Anthrax sweater, including manufacturing parts like plates, molds and rollers.

Anthrax are currently on tour as support for Lamb of God alongside Deafheaven and Power Trip. For a full list of dates, visit our 2016 Guide to Rock + Metal Tours. The band was also spotlighted in the Smithsonian Institute’s National Museum of American History’s ongoing ‘Places of Invention’ series. The profile talks about the early days of the band and their fusing of hip-hop and thrash on their collaboration with Public Enemy on “Bring Tha Noize.”