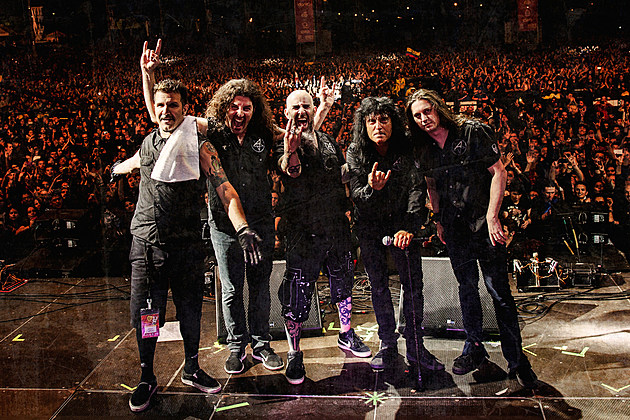 Anthrax have just made the brand new track “Breathing Lightning” available for streaming. The song premiered last night (Jan. 3) on the BBC Radio 1 ‘Rock Show’ with Daniel P. Carter and can be heard in full below.

Back in October 2015, Anthrax gave us “Evil Twin,” the first piece of music shared from the band’s 11th studio album, For All Kings. We’ve been waiting for Anthrax to give us another taste, and now they have with “Breathing Lightning.”

“Lyrically, it’s another song that was influenced by Stephen King,” guitarist Scott Ian says in Anthrax’s “Breathing Lightning” preview clip. “Stephen King has been such a giant part of my life. His Dark Tower series; if I had to pick one thing that I love the most from him it would be the Dark Tower books because there’s seven books so I don’t have to choose one. The character Roland; it’s just something that stays with me a lot … I’m kind of weaving in and out of reality and fantasy in that song.”

“Breathing Lightning” and “Evil Twin” will be available at indie retail beginning Jan. 15 as a download card included in each box of the band’s fully customized, limited-edition full, 52-card deck playing cards. On Feb. 26, the card will enable the holder to download the entire album.

Anthrax will soon be out on tour supporting Lamb of God for a run of U.S. dates beginning Jan. 15 in Pittsburg, Pa., and concluding Feb. 12 in Los Angeles. Click here for the full list of tour dates.