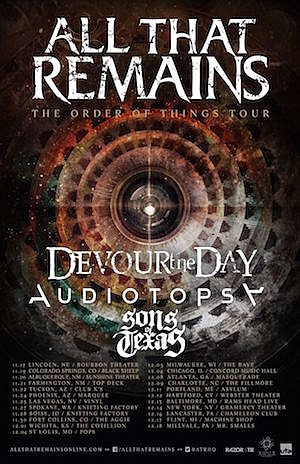 The road dogs in All That Remains have just released the details for their upcoming The Order of Things tour which will proudly feature support from Devour the Day, Audiotopsy and Sons of Texas. The monthlong trek will begin on Nov. 17, just 10 days after ATR’s current co-headlining tour with We Came as Romans concludes.

All That Remains released their seventh studio album, The Order of Things in January of this year on Razor and Tie. Charting at No. 25 on the Billboard 200, the album was the fifth All That Remains album to debut within the Top 25. In total, the band has sold over one million albums and has proven to be one of rock’s heavyweights.  The band has already hit radio with “This Probably Won’t End Well” and “For You” off the current disc and a third single, “Victory Lap” will be released to radio Oct. 27.

Commenting on their tour with All That Remains, Audiotopsy (featuring members of Mudvayne, Hellyeah, and Skrape), guitarist Greg Tribbett states, “We are looking forward to touring with our friends in All That Remains! You don’t wanna miss these shows! Come out and have a good time and get away from the daily grind! See you there.”

In September, longtime All That Remains bassist Jeanne Sagan amicably split with the band after nine years of delivering the low end. Replacing Sagan is former Bury Your Dead bassist Aaron Patrick, who was also, at one point, a live member of Devildriver and In Flames. Commenting on the new member, frontman Phil Labonte stated, “We’re sure he’s going to be the perfect fit and considering his musical history I think he’s going to add a new and cool dimension to ATR’s sound moving forward. Come check us out and see Aaron rock on the HardDrive Live Fallout Tour!”

To check out the remaining dates on the aforementioned co-headlining HardDrive Live Fallout Tour with We Came as Romans, click here. To see the dates for The Order of Things tour, take a look at the dates below.

All That Remains, ‘The Order of Things’ Tour Dates:

All That Remains’ Phil Labonte Plays ‘Wikipedia: Fact or Fiction?’

Watch the Video for All That Remains, ‘For You’