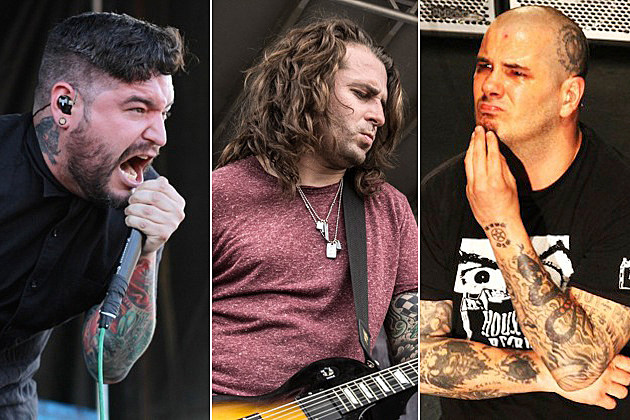 Dimebash, the annual tribute to fallen guitarist Dimebag Darrell, has enjoyed five successful events, but the latest has been marked with controversy. After closing the set with “Walk,” Philip Anselmo gave a Nazi salute and yelled, “White power!” The video has sent a shockwave across the metal community and the legendary singer has been met with increasing backlash. Technical deathcore outfit All Shall Perish and Darkest Hour guitarist Mike Schleibaum are the latest to condemn the Pantera frontman.

Posting on their Facebook page, All Shall Perish opened up with praise for Pantera, but the accolades stopped quickly. “We consider Pantera to be the single greatest metal band of all time,” the statement began, “but we should never be afraid to call out our heroes.” The band continued, definitively adding, “Seeing Phil’s actions and his cowardly justification is not only disgusting and inexcusable but antithetical to the punk, metal, underground ethos to which we subscribe. No gods, no masters, and certainly no master race.”

Adding that there can be no justification for these actions, the statement goes on to give perspective of the events with some history to boot and filtered it through a modern societal lens. The end of the post read, “Racism and its institutions are a stain on American culture; likewise, Phil’s actions are a stain on the legacy of Pantera, Dime’s memory and the metal community as a whole.” All Shall Perish wrapped things up simply citing the lyrics of a Dead Kennedy‘s classic, “Nazi punks, f–k off.”

Darkest Hour’s Mike Schleibaum sounded off on Anselmo, also on Facebook, responding to the video Machine Head‘s Robb Flynn posted. Flynn was one of many to perform at the Dimebash event and condemned Anselmo’s empty excuse of calling the actions an “inside joke” and that they were all drinking white wine backstage. Flynn noted there was no white wine present at Dimebash and Schleibaum praised the Machine Head mainman for calling out the Pantera singer across the video’s 11 minute span.

“It’s a video like this that reminds me to say it was an honor to have toured with Machine Head,” Schleibaum started off. He goes on to praise Flynn and explains why this issue is personal, stating, “Robb is both brutality honest and totally on point in this video. I know that most of the world would watch this video and say who the f–k gives a s–t – but Pantera meant a lot to me, music means a lot to me, and heavy metal is my life. So this is like sort of in my backyard.” He continues, saying he echoes Flynn’s statement and that “racism has no place in metal to me, Metal / punk / hardcore / whateverthef–kyoucallit should be unifying.”

This isn’t the first time Anselmo has spewed racist words. In 1995 he delivered a white pride speech in the middle of a Pantera show. The frontman has backtracked as well, stating, “Kids that come to our shows and yell ‘white power’… all I’ve got to say about that is I ain’t them kids,” in an MTV interview.