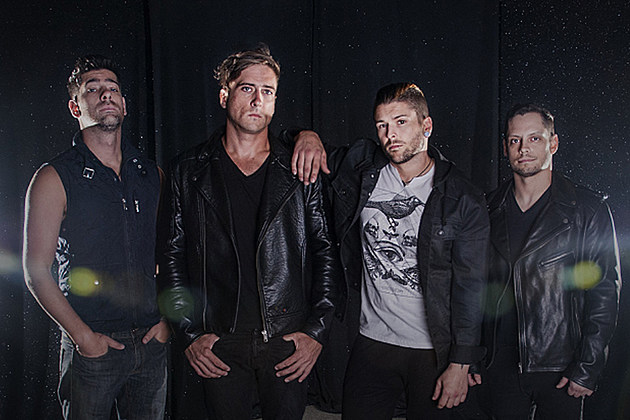 Texas has produced a lot of great rock over the years and the latest act to emerge from the Dallas music scene is Adakain. The group just released their Never Coming Home album, which was produced by Ra frontman Sahaj Ticotin. The band has been gaining momentum behind the current single “Hey Girl,” and we had a chance to chat with frontman Ryan Ray about the song, their Never Coming Home album and more. Check out the interview below:

Congrats on the Never Coming Home album. I know the band members have crossed paths off and on before everyone came together in Adakain. Can you talk about how satisfying it is to have reached this point and with the group that you have now?

First of all, thank you very much! Yeah it’s true, Corey Goodwin (guitar] and I have known each other for over 10 years and were in a band together when we were younger, and Ryan Carroll (drums) and I have known each other for years too, and I even lived with him for a couple years. As far as if being satisfying, I am happy to have this group of guys, not only because they’re good musicians, but because I don’t have to constantly keep them focused on what we’re doing. We’re not kids, and we know what we’re trying to accomplish, but I will never be satisfied with where we are as a band, because that will keep us constantly moving onward and upward. I do take the time to appreciate and feel good about what we’re doing, I don’t want to come off as heartless or too business-like, because I do fully enjoy what’s happening, but to me the work has really just started for Adakain.

Going into Never Coming Home, did you have an idea of what you wanted to do for the album? If so, how close did the final disc come to your original plan for the album?

I did have an idea, and mostly it was to bring a positive message, and I feel we did that. I try not to go into a recording with too concrete of a plan, so that there’s room for new things to be discovered along the way. I am extremely pleased with how the album turned out!

You’ve worked with Sahaj Ticotin from Ra, who has paved his own path to radio success over the past decade-plus. What made him the right guy to produce this album for the group?

When I was first taken to Sahaj’s studio, I didn’t recognize him because I hadn’t seen that many pictures of RA over the years. I love “Do You Call My Name” and I can still remember where I was the first time I heard it on 97.1 The Eagle, so after I was sitting in the studio talking to him for a few minutes, I noticed his acoustic had a big RA drawing on it, and I said, “Hey, do you know the guys in RA or something?” It’s funny to think about because Sahaj was like, “Um, yeah, it’s my band, I’m the singer and songwriter” and right then I had a bit of a starstruck moment, and was even more excited about working with him.

As we began the process, he brought out the best in me vocally, and his songwriting was fantastic, and he had an important quality that I was looking for: He knew how to make it heavy, how to remove any “cheesiness” from the music, and make it real, which is very important to me.

The group members have found common influences in bands like Metallica, Pantera, Slipknot and Tool. Give us an example of where you can really feel this and maybe an example of a not so obvious influence the band may have.

I think Track 3 — “Don’t Try” — has a heavy Metallica groove on the verses, and I think you can feel a kind of industrial, Static-X feel on Track 9 — “Don’t Look Down.”

Heartache and pain has proved to be such a rich muse for many acts over the years, but Adakain in more cases than not offer something a little more uplifting and inspirational. Is it more of a challenge to write this particular mindset?

Not at all. I choose not to live my life in an area of heartache and pain, not to say I don’t experience it, because that’s part of what makes us human, but I want to focus on the positive. You get to choose one of two things every day when you wake up: love or fear, and I want to be something people can put on and feel good about their day, life, or whatever they’re doing. It’s all about managing your thoughts, and I choose to think positively.

You’ve got a new single starting to take off. Can you tell us about “Hey Girl”? Where does the song come from and was there anything that stood out about the studio session for that one?

“Hey Girl” was an idea that Sahaj and I had, and it’s the opposite of what a lot of rock songs put out there over the years. Sure everyone likes to “hook up” and I’m not begrudging that to anyone — do what you want, but the message of this song is this: Ladies, you don’t have to act like a drunk whore to get the attention that you crave from the opposite sex. Have fun, have some drinks, whatever, but just know that if you treat people like their trash, get wasted and throw yourself out there because you think that’s what society wants you to do, then you will get attention, it just won’t be what you’re looking for. Have a little self-respect, and realize that you are worth more than a few vodka tonics and a one night stand.

The video for “Hey Girl” recently arrived as well. How is it shooting music videos? Is it everything you thought it would be? And what can you share about your shoot for “Hey Girl”?

I’m super happy with how the video turned out! My good friend in Dallas, Matthew JC and his company JC Creative Group really went above and beyond with the video. I will say that the band and I felt like rock stars throughout the process, because Matt had everything set up for us, and all I had to do was perform.

“We Crawl” is also getting some love off the disc. Tell us about the song and where it comes from.

“We Crawl” is a song that I tried not to get too political with, simply because I want everyone to be able to enjoy our music, regardless of their views. I think though, however you lean politically, we can all agree that the current system is broken, and we need a fresh start, and that’s what the song is really about.

With the album out, you can now dig in as deep as you want on playing songs from the disc. I realize it may change from day to day, but do you have a favorite song to play live off the album and if you can talk about why?

I feel like I answer this question different every time it’s asked, but the main answer, and the one that keeps popping up first in my head is “Once Is Enough.” That song has all the elements you could want as a hard rock fan, heavy driving riff, big singing chorus, heavy screams, and a beautiful clean bridge breakdown, as well as the classic guitar solo.

Being in Texas, there’s a fair share of hard rocking bands that roll through your area and you’ve opened shows for some pretty big names. Best piece of advice or something you learned from watching some of these acts that you’re applying to your future?

The bands that are serious and successful always operate as a unit, with one goal in mind, and never deviate from that with selfish wants and needs.

As far as the rest of this year, we have one more tour to do, then we’re capping it off with a Dec. 18 show with Drowning Pool at Trees in Dallas for the annual “Toys 4 Tots” show. It’s a great thing because it always sells out, and the Marines are there in uniform collecting the toys (you bring an unwrapped toy for your entry fee to the show) and donating them to family’s who can’t afford them at Christmas. Next year we plan to tour as much as we possibly can!

Thanks for the interview. Anything you’d like to add that maybe we haven’t discussed?

You are more than welcome, and we appreciate the love Loudwire has been showing Adakain. We really, really appreciate it! I’d just like to leave you with this: Remember why you go to a live show. Remember why you listen to music. It’s not to be cool, look cool, stand in the back with your arms crossed talking s–t about the band onstage, it’s to lose yourself for a few hours, and enjoy music with like-minded individuals, and be a part of something bigger than yourself. Treat others with kindness, because you never know what someone else is going through, and the kind words or actions from you could be just what they needed to get them through the day. See you on the road!

Many thanks to Adakain’s Ryan Ray for the interview. As stated, the band’s Never Coming Home album is out now. Pick it up via  iTunes and Google Play. And keep up to date with their touring at this location. Watch the “Hey Girl” video below.