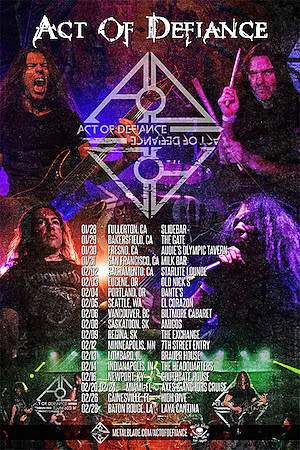 Act of Defiance, the Los Angeles thrash outfit started by former Megadeth members Chris Broderick and Shawn Drover, just can’t stay off the road and will be putting the tires to the pavement this winter as they gear up for another run.

The quartet, which is rounded out by Shadows Fall four-stringer Matt Bachand and former Scar the Martyr vocalist Henry Derek Bonner, released their debut album, Birth and the Burial, in August 2015. With a heavy focus on melody, Ace of Defiance play a unique brand of the trash that incorporates heavy grooves with Bonner’s vocals teetering on the edge of extreme metal and flipping the switch to gritty clean singing at other times.

“After just getting home from a great co-headlining tour with our good friends in Allegaeon, we are super stoked to get right back on the road for round two, with our 2016 North American tour,” stated drummer Shawn Drover. “There were lots of cities that we were unable to play on our first go around, so this time we wanted to hit as many places as we can to keep promoting Birth and the Burial shortly after the holiday season. We really want to tour as much as possible for this record and bring 100% true heavy metal to as many people as possible. See you on the road!”

Following their headlining trek, Act of Defiance will make a brief return to the road opening for Hatebreed, who will be touring in support of their new album, The Concrete Confessional.