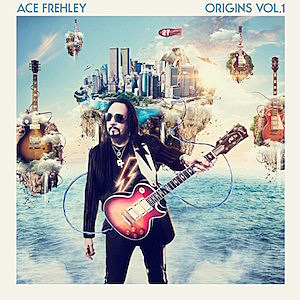 KISS legend Ace Frehley will be releasing a new covers album this year. Origins Vol. 1 features an all-star lineup of musicians including his former KISS bandmate Paul Stanley, who hasn’t recorded with Ace in nearly 20 years.

The list of musicians Ace rounded up for Origins Vol. 1 is pretty impressive. Stanley joins Ace for a cover of Free’s “Fire and Water.” “I thought Paul did a fabulous vocal on it,” Frehley tells Rolling Stone. “He jumped at the chance to do this because it’s something that’s outside of KISS and his character in KISS, and it gave him a chance to, you know, sing. With Paul, you usually think of him singing in a slightly higher register and on ‘Fire and Water,’ he’s singing deep from his diaphragm, and it’s a real cool vocal. Everyone’s who heard it was just thinks it’s the s—t.”

Other legendary guests include Slash, who trades leads with Ace for a version of Thin Lizzy’s “Emerald” and Lita Ford, who sings and plays lead guitar on a cover of The Troggs’ “Wild Thing.” Guitarist John 5 appears on two tracks within Origins Vol. 1 — Jimi Hendrix’s “Spanish Castle Magic” and KISS’ own “Parasite.” Pearl Jam’s Mike McCready also joins in for a KISS cover, performing “Cold Gin” with Ace.

Ace Frehley’s Origins Vol. 1 will see an April 15 release. Fans who pre-order the album will get an instant download of “White Room” with their purchase. Ace Frehley is set to tour the U.S. soon, so check out his full list of dates here.