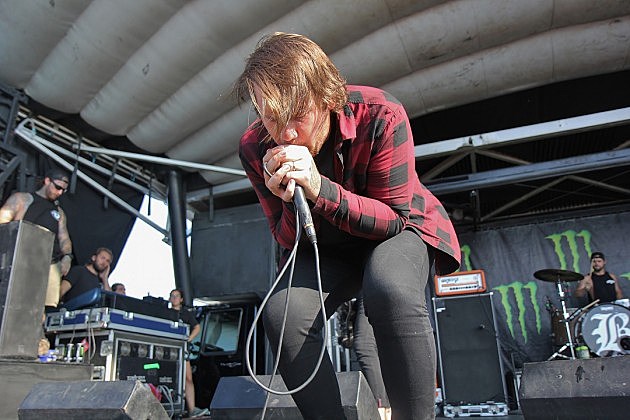 Caleb Shomo’s new band Beartooth have been garnering a lot of buzz with their new album Disgusting. They spent the summer on Warped Tour and have some upcoming tour dates with Atreyu. The band also has some dates with Slipknot and Suicidal Tendencies, as well as a small trek in the UK. We had the chance to talk to Shomo about the new album and his decision to step away from his former band Attack Attack! Check out our interview with Caleb Shomo below:

Disgusting is the name of the debut album — what does this title mean to you personally?

It was just the way I was feeling when I wrote that record. I was in a really dark place and the record was kind of my way of working through it.

How was the overall creative and recording process for the full length album?

It was good, honestly it was very smooth. I did the record myself, I have a studio in my house. I would just go down and write songs whenever I’m bored or if I can’t sleep in the middle of the night I would just go and work on music. It went well.

What are some of the most disgusting things you’ve experienced on tour that you can talk about?

[Laughs] One time I was playing a show and for some reason I didn’t have shoes on, they fell off or I lost them in the crowd or something, some dude in the front – I would step up on my box in the front – and some dude would just pet my feet. I would kick him off and be like, “Dude stop.” I had to be in his face, out of the mic and tell him to stop doing it. It was very bizarre and gross, not my cup of tea.

What does being in Beartooth do for you as an artist that Attack Attack! didn’t do?

It’s a lot more of a release and I feel like I can write much more honest songs in this band because that was kind of the point from the get-go. It feels really good to play and I’m really happy in this band.

What influenced your decision to leave Attack Attack! in the first place and was it difficult to transition?

In a way, yeah, it sucked, Attack Attack! was something I was involved in since I was 14 years old. At the end of the day, it was just something I needed to do. I wasn’t in a good place mentally, I wasn’t healthy and I just needed to quit that and get my mind together.

Thanks to Caleb Shomo for taking the time to talk with us. Get the new Beartooth album ‘Disgusting’ here.

Watch Beartooth’s ‘In Between’ Video