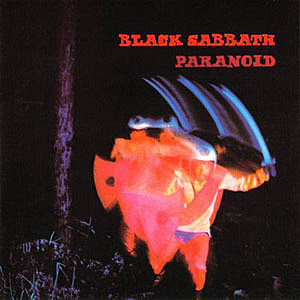 When fans and critics look back at the early career of Black Sabbath they recognize that the band released six groundbreaking albums in a row before being consumed by their appetites for drugs and alcohol. But what they often fail to absorb is that all six albums were released within a five year timeframe. Yes, vocalist Ozzy Osbourne, guitarist Tony Iommi, bassist Geezer Butler and drummer Bill Ward were reinventing the mythology of rock ‘n’ roll as they stormed from one town to another, but they had their act together enough to write some legendary music. Take, their second album, Paranoid, which was released on September 18, 1970.

The landmark release, which includes the metal staples “Paranoid,” “War Pigs” and “Iron Man,” was recorded live in the studio with producer Rodger Bain. And they tracked the entire album at Regent Sound Studios and Island Studios in London between June 16 and 21. It took just six days because, well, that’s all they were given.

“We finished the first album, toured Europe for six weeks and then went right back in the studio,” bassist and lyricist Geezer Butler told me in 2010. “It felt like the four of us against the world. We still hadn’t realized we had made it, you see?”

Sabbath started working on Paranoid so soon after returning from the road, all they had seen was negative reviews of their first album from the world’s rock press. They didn’t realize a loyal fan base was building in the U.S. and they’re main goal was to prove to their families that they weren’t wasting their time making music.”

“Our families had no nope in us whatsoever of ever making anything of ourselves,” Butler said. “They thought we were bums. And our friends used to laugh at the idea that we’d ever be successful at what we were doing. That brought us closer together and made us more determined to be successful. We didn’t feel like rock stars or anything. It was quite the opposite.”

Compared to the single day Black Sabbath had to record their first album, six days seemed like a luxury. Fortunately, they had played some of the songs on the road, so when the stepped into the studio they acted on instinct. “We literally went in and played as if it was a live gig,” Butler said. “We didn’t know anything about studios or production or engineering. We just went in, set up and played live in the studio and they recorded us. It sounds easy, but it’s actually a really hard thing to do — to record a band live in the studio and get the whole feeling across. A lot of producers tried that, but dismally failed. But Rodger had the for it. He came up with a few suggestions here and there and we’d do it.”

One of the biggest suggestions was to write another song for the album that would serve as a single. So after tracking the other seven songs, Black Sabbath wrote the title track on the spot.

“I sat there during the lunch break and came up with the main riff for ‘Paranoid,’ Iommi said. “And then when the other guys came back I played it to them and they thought it was good, so we recorded that just as a filler.”

“We didn’t think anything of it because we thought it was just another song,” Butler said. “And then later the record company said, ‘Hey guys, this is the best song on the album. Let’s call the record Paranoid.’”

It was a strange suggestion since Black Sabbath and Warner Bros. Records had agreed to call the album War Pigs and were already working on the cover art. Even that was a compromise. The band’s originally wanted to use the title Walpurgis, for the record, which Butler said is “kind of like Christmas for Satanists.” The label refused and a compromise was reached – or so everyone thought.

“The record cover is really horrible to begin with, but it was based on this idea of ‘War Pigs,’” Butler said. “The cover was bad enough when the album was going to be ‘War Pigs,’ but when it was ‘Paranoid’ it didn’t even make sense.”

“There’s a guy standing there with a shield and a sword, with the album title called Paranoid,” added Iommi. “Imagine the questions we got asked after that? “What’s the have to do with Paranoid?” Well, nothing, really. But that’s how it was.

Contrary from being the Satanic album it was portrayed as, Paranoid is filled with relevant social and political commentary. For example, “War Pigs,” with the famous line, “Satan laughing spreads his wings” isn’t about the Devil at all. “To me, war was the big Satan,” Butler said. “It wasn’t about politics or government or anything. It was evil. So I was saying ‘Generals gathered in the masses / Just like witches at black masses’ to make an analogy. But then everybody turned it all upside-down and accused of being Satanists. And in a way, I suppose we bought into that, but of course we never were.”

Another song, “Fairies Wear Boots,” which was based on an incident in which the band members were harassed and threatened by a gang of skinheads wearing Dr. Martens boots. “I wrote about whatever I saw going on around me,” Butler said. “I wrote about the Cold War in “Electric Funeral.’ It was always touch and go whether Russia would drop the atomic bomb on us or we would drop the atomic bomb on them. So atomic war was always imminent, we thought.”

Much of the energy of Sabbath, especially on their first two albums, stemmed from their disgust with the rest of ‘60s youth culture. Having grown up in war-torn Birmingham, ‘flower power’ was an entirely foreign concept. They were surrounded by bombed out parks and when they looked around they saw unhappy people with dead-end jobs.

“We were four working class people in the most industrial part of England and all we had to look forward to was a job working in a factory,” Butler said. “We felt hopeless and constantly frustrated and we thought at any second we’d be called up to drop in to the Vietnam war because it looked like Britain was going to get involved in it as well. So there wasn’t much future in anything for us.”

As legendary as it became, Paranoid was a slow grower. The album reached No. 23 on the U.S. charts and No. 8 in Britain. The album went Gold in the States on May 7, 1971, almost eight months after it was released. And it took another 15 years to go platinum. In 1995, the album was certified quadruple platinum.