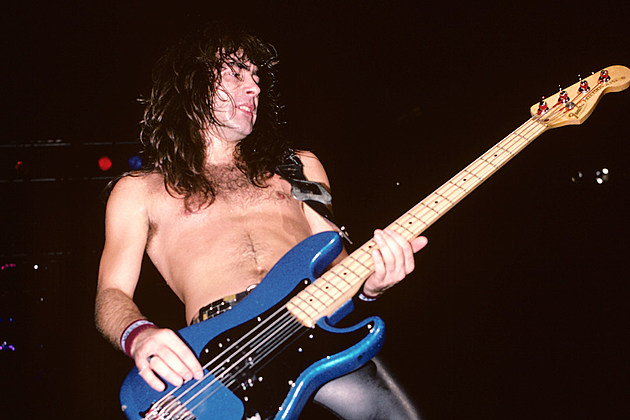 On Christmas Day, 1975, Steve Harris unknowingly played heavy metal Santa Claus and gave the music world one of the greatest gifts possible: Iron Maiden. It wasn’t something that could be placed under a tree or wrapped up with a bow and it took five years to yield a debut album after finally signing a record deal, but it was a gift the metal world would be most thankful for over the ensuing decades.

Before there was Iron Maiden, Harris had plucked the strings in two other bands: Gypsy’s Kiss and Smiler. Joining Gypsy’s Kiss just 10 months after purchasing his first bass in 1971, he made the transition from fan to musician. His first show was at the Cart and Horses, a venue he had been attending for years and one he would famously leave his mark on with Iron Maiden just a couple years later. After a few shaky performances, the group disbanded due to musical differences and Harris moved on to what he considered to be a more professional outfit, Smiler.

It was the first union of Harris and drummer Paul Sampson and singer Dennis Wilcock, both of whom would enjoy brief stints in Iron Maiden before a more ironclad lineup was found. The band played with a more straightforward approach, which directly conflicted with Steve’s growing ambitions for more complex songwriting and arrangements. As he began to write more on his own, the band wasn’t willing to take their sound in his more progressive direction, which was influenced by other English greats like Wishbone Ash and UFO. The refusal to play any of his songs forced Harris to split from the band and venture out on his own.

Taking the band name from the 1939 film The Man in the Iron Mask, Harris was unaware another Iron Maiden had formed. In the Early Days DVD, Harris recalls receiving a phone call from the band, complaining they had already taken the name, but “We told them to piss off and that was it.” Shortly after, Iron Maiden was registered under Harris, ending the war before it had even started.

The first incarnation of Iron Maiden came together on Dec. 25, 1975, when a 19-year-old Harris recruited Dave Sullivan and Terry Rance on guitar, Ron ‘Rebel’ Matthews behind the drums and the short-lived singer Paul Day. The vocalist didn’t last long as he was sacked for a lack of stage presence, a quality the band would later hit pay dirt with when bringing Bruce Dickinson into the fold in the Fall of 1981.

The lineup would quickly be shaken up, with former Gypsy’s Kiss bandmate Dennis Wilcock replacing Day in 1976. The KISS-influenced singer wore face paint onstage and was responsible for guitarist Dave Murray’s entrance into the band. The idea of three guitarists — a circumstance the band would later encounter again in 1999 with better results — did not sit well with Sullivan and Rance. Tensions flared, causing Harris to temporarily dissolve the band in ’76. This didn’t last long and a revamped lineup continued, with a revolving door of musicians until finding a relative core lineup around 1978 with Dave Murray and Paul Di’Anno‘s services in tow.

Dave Sullivan and Terry Rance still remained part of Iron Maiden’s legend decades later. Harris owned a pub in Portugal called Eddie’s Bar, which was opened in 1989, closed for a year in 2005 and re-opened with Sullivan and Rance as managers along with the first-ever Iron Maiden roadie, Jeff Daniels. Unfortunately, the bar closed again in 2009, this time for good.

The first recording lineup consisted Steve Harris, Paul Di’Anno, Dave Murray and Doug Sampson, who recorded the Soundhouse Tapes demo in 1979, selling out 5,000 copies in weeks. The demo landed them a record deal with EMI after turning down offers due to industry pressure to change their sound and/or look. In 1980, Iron Maiden’s self-titled debut album was ready, though with another revamped lineup; out was Doug Sampson and in was Clive Burr along with second guitarist Dennis Stratton after Adrian Smith declined to continue with his band Urchin.

Smith would join Maiden for their next album, Killers, replacing Stratton and bringing savage riffing and even stronger melodies to the band. It would be the last for singer Paul Di’Anno, who was longing to get off the road and had a steadily increasing drug habit. Enter Bruce Dickinson of Samson and Iron Maiden’s career arc skyrocketed with the singer’s debut on Number of the Beast, yielding the timeless title track, “Run to the Hills” and the masterful “Hallowed Be Thy Name.” One year later Burr was dismissed and Nicko McBrain solidified the band’s classic lineup: Steve Harris, Bruce Dickinson, Adrian Smith, Dave Murray and Nicko McBrain.