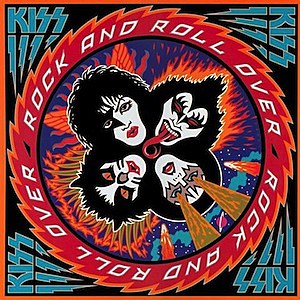 The commercial breakthrough for megastars KISS was 1976’s Destroyer, a slick polished hard rock album that contained the ballad “Beth,” the band’s most successful single. After its release the band faced a critical fork in the road. Either they could continue down path of mainstream success and seek to continue to appeal to their ever-growing fanbase or they could shake up the formula and return to some of the grit and urgency of their first three studio albums and the groundbreaking concert record Alive. After carefully weighing their options KISS returned to their roots and wrote Rock and Roll Over, which was released on Nov. 11, 1976, less than eight months after Destroyer hit the shelves.

From the blues sleaze rock of the opening track “I Want You” to the gruff, melodic pop of “Hard Luck Woman” — with vocals by drummer Peter Criss — Rock and Roll Over is an everyman’s journey through the band’s two most valued elements: girls and kicking ass. To give the album the spirit and echo of a live show, producer Eddie Kramer recorded Criss’ drums in a bathroom, with the artist connected to his band mates via a video conference link. The rest of the group tracked from the stage of the Star Theatre in Nanuet, New York.

With a more immediate sound, KISS were able to present infectious rock songs, including “Take Me” and “Ladies Room” without sacrificing the raw power the band strived for. To perpetuate their superhero image, KISS hired artist Michael Doret to create the iconic cover, which featured cartoon heads of the four band members in face makeup inside a round ring of lightning. Each musician appears like a deity. Gene Simmons’ hair is ablaze and his serpentine tongue uncurls lasciviously. Criss has a forcefield around his head; Ace Frehley shoots laser beams from his eyes and Paul Stanley sports what appear to be orange wings. KISS hired Doret again to design the cover art for 2009’s Sonic Boom.

Like many of their early albums, KISS recorded Rock And Roll Over in less than two months. Released at the peak of the band’s popularity, the album entered the Billboard album chart at No. 11, thanks in part to the singles “Hard Luck Woman” and “Calling Dr. Love.” Stanley originally wrote the former with the intention of giving it to Rod Stewart, who no doubt would have turned it into a top-charting hit. But Simmons convinced Stanley to keep the song for KISS, so Stanley gave it to Criss and the number became a Top 20 song on the Singles chart. “Calling Dr. Love” fared even better, peaking at No. 16 on the Billboard chart. Simmons wrote the song at a Holiday Inn in Evansville, Indiana and the title was inspired by a hospital intercom announcement in the Three Stooges film Men in Black.

Rock and Roll Over went platinum Jan. 5, 1977, just over three months after its release. The album was released at the peak of KISS’ popularity and the members were able to capitalize with a line of merchandise, their loyal fanclub the KISS Army and pyrotechnic concerts that upped the ante on what the band was capable of onstage.

Revisit the Story Behind ‘Music From the Elder’