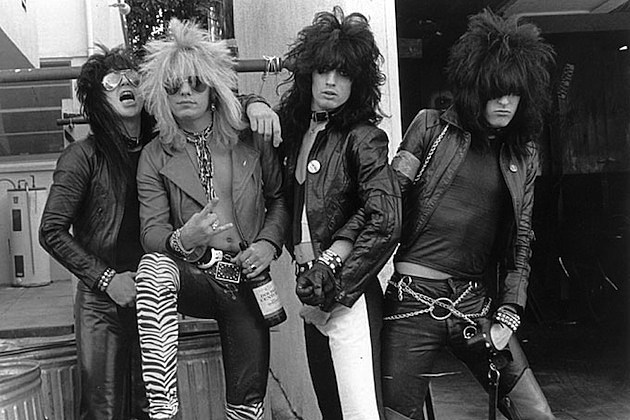 Hellbent for success, Nikki Sixx‘s life took numerous twists and turns on the road that led him to found Motley Crue on Jan. 17, 1981. With stars in his eyes, the young bassist carried a heavy emotional burden from his childhood, using it as fuel to spit in the collective face of the world, but even his brightest ambitions he couldn’t have fathomed what would become the world’s most notorious rock band.

The reputation Motley Crue gained for their penchant for the tried and true “sex, drugs and rock ‘n’ roll” formula was no accident. Already heavily immersed in the world of substance abuse, Sixx was working dead end jobs and jamming with musicians trying to find the right incarnation needed to hit it big. While countless others had the same dreams as him, it was Sixx’s indomitable spirit shaped from his troubled past that made him refuse to back down.

After leaving glam rock outfit London — which would later include W.A.S.P.’s Blackie Lawless and Guns N’ Roses‘ Izzy Stradlin, both in their pre-fame days — the fresh 22-year-old four-stringer decided to head up his own band, mainly so he didn’t have to abide by someone else’s rules. He teamed up with the 18-year-old drummer Tommy Lee and short-lived guitarist Greg Leon. The two members inducted into Sixx’s band had previously established chemistry playing together in the rock outfit Suite 19.

Leon quit the band fairly quickly, leaving the Sixx and Lee to find another guitarist for a group which they had yet to name. The search found the pair looking through ads in The Recycler, where they happened upon a one line statement from a guitarist. The ad now famously read “Loud, rude, aggressive guitar player available.” After seeing the ad, Mick Mars was asked to audition and was immediately accepted into the band.

Mars and Sixx had met prior to the audition, though neither of them had realized it at the time. The axeman had previously played in a band called White Horse and after deciding $2 tequila shots at the Stone Pony, where White Horse were playing, was too expensive, he made a trip down the road to Magnolia Liquors. Behind the counter was an even younger Nikki Sixx, who had been using speed and drinking when the two had their first encounter. Mars looked at Sixx’s appearance —undoubtedly a rocker — and asked what music he liked. When Sixx responded with a list of bands including KISS, the guitarist wrote him off because he was not a fan of face-painted four-piece. Regardless, he invited the kid behind the counter to check out his band at the Stone Pony.

When Sixx clocked out, he got drunk and walked in on Mick Mars playing a solo using a microphone stand as a slide and was mesmerized by the guitar player he had met just hours beforehand. The two drunkenly talked after the show and Mars gave Sixx his number, but nothing came of it afterwards until their happenstance meeting later on.

With bass, guitar and drums locked down, the group invited a singer simply named O’Dean to front the band. After cutting one demo with the vocalist, he was sacked in exchange for a singer Lee knew and had played with in high school. The platinum blonde Vince Neil was singing in a band called Rockandi and after watching him perform, the three knew they had found their true lead singer. Neil brought a charismatic energy to the stage, arresting the crowd in the process. He also happened to pack the venue full of women — all qualities Sixx, Lee and Mars knew they needed for success.

Vince Neil initially turned down the offer, but a persistent Tommy Lee persuaded the singer to come down for an audition. When he got in contact with Vince, the frontman mentioned his band had screwed him over and he agreed to check out the band that still had no name. He showed up April 1, 1981 with a girl that the rest of the guys dubbed “Lovey,” and she proceeded to see if the band was the right fit. Though she didn’t agree, Neil joined the group anyway and just minutes into the rehearsal Nikki was rewriting lyrics to suit his new singer’s voice. The first song that came together, “Live Wire,” went on to be the opening track off their debut record, Too Fast For Love.

The quartet eventually landed on the name Motley Crue with the suggestion coming from Mars. The spacey guitarist had scribbled down the words “Mottley Cru” in his days with White Horse when one of the members said they were a “a motley looking crew.” With a couple adjustments, adding an “e” to the end, remove a “t” and a couple well-placed umlauts with inspiration from Lowenbrau beer, Mötley Crüe were officially underway.

Over the course of the next three plus decades, Motley Crue became one of the biggest bands in the world, selling in excess of 100 million records with five studio albums going platinum, some of them several times over. Their reputation was a tour manager’s literal worst nightmare as they unseated any band before them who had previously laid claim to being the baddest group in rock ‘n’ roll.

See Motley Crue’s Shout at the Devil and Dr. Feelgood on the Top 80 Hard Rock + Metal Albums of the 1980s

Revisit the Anniversary of Motley Crue’s Debut, ‘Too Fast For Love’