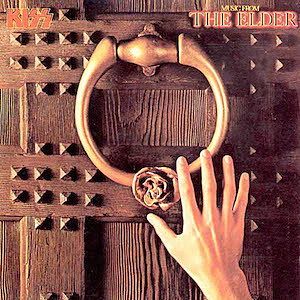 The ninth studio album by KISS is, perhaps, most significant for being the band’s greatest misstep. Not the poppy, disco-inflected sheen of Dynasty, and not even the self-implosion of Unmasked could have prepared fans for the overblown, vacuous narcissism of Music From the Elder, which came out on Nov. 10, 1981.

Having lost drummer Peter Criss, who left two months after they started tracking The Elder, KISS hired Eric Carr to take Criss’ place. Feeling the urge to make a bold, larger-than-life statement following the commercial collapse of Unmasked, Kiss decided to come back swinging with hard-hitting songs that resembled their pre-“Love Gun” material. In addition, the band felt that only an ambitious, concept album would gain them back the credibility they lost when they softened their sound and the respect they never received from mainstream critics. And so, KISS ill-advisably started to craft their version of Pink Floyd’s The Wall – even bringing in The Wall architect Bob Ezrin to produce.

“It’s a movie, in itself, of just absolute folly,” Paul Stanley told me about the release. “It’s us overstepping our goals and tripping over our own feet. I’m not ashamed of it by any means, but that and KISS Meets the Phantom stand out as two examples of us getting off at the wrong exit.”

If KISS intended to make a louder, heavier album than Unmasked they probably shouldn’t have hired the American Symphony Orchestra and St. Robert’s Choir to add symphonic and operatic flavor, let alone incorporate a storyline that makes Lou Reed and Metallica’s Lulu look like The Who’s Tommy.

The plot for Music From the Elder revolved around “The Boy,” who is recruited and trained by an organization called the Council of Elders, a secret society that’s part of a larger group called Order of the Rose, whose sole objective is to combat evil superhero-style. The story is told from the perspective of The Boy, who battles adversity and self-doubt during his training, but ultimately turns out to be as confident and self-assured as Gene Simmons in a sorority house. Interestingly, The Boy’s father figure and caretaker is a character named Morpheus, which doesn’t give the album any more validity, but poses the question did the Wachowski brothers listen to Music For the Elder before crafting their mindblowing film trilogy The Matrix? (Simmons would answer with an unreserved “yes,” but then again Gene is probably convinced the Wachowskis got their ideas for The Matrix from KISS comic books).

Kiss started recording Music From the Elder in March 1981, working in Toronto, New York City and guitarist Ace Frehley’s home studio in Wilton, Conn. To prevent anyone from hearing what they were up to, Ezrin and the band worked in total isolation. Because of the need for numerous sessions with outside performers KISS didn’t finish the album until September.

Then, the band proudly presented it to Casablanca Records, and was allegedly greeted with complete bewilderment. When KISS insisted that their fans would understand and appreciate their efforts to expand beyond their normal parameters (ones which led many to use the acronym Keep it Simple Stupid to describe the bands no-frills musical approach). KISS fans weren’t any more understanding of the album’s grand design than Casablanca. The album debuted at No. 75 on the Billboard album charts and quickly faded into obscurity, hitting record store cutout bins just months after its release.

“My sense was always that KISS was about having no rules,” Stanley said. “And although I hold the fans in the highest of esteem I also expect them to understand that everything we do may not be to their liking, and the way they can show it is by not buying it. Well, they spoke loudly and clearly when that record came out.”

Music From the Elder, sported just one single, “A World Without Heroes,” one of two songs that didn’t feature Frehley (the other was “I”). Apparently, the guitarist was discouraged by the band’s departure from the hard rock direction it has promised for the album and stopped showing up to sessions. While Stanley admits that the record wasn’t the success it was supposed to be he says that it led KISS in a direction that would ultimately prove beneficial.

“It would be crazy for us to not follow the paths we want to. Ultimately they get us to where we’re going,” he said. “We couldn’t have done Creatures of the Night if we didn’t do The Elder. I don’t begrudge anything we’ve done because everything we do leads us to where we ultimately get.”

See the Yearbook Photos of Paul Stanley and Other Rockers

Ace Frehley Says One Nice Thing About Each KISS Bandmate