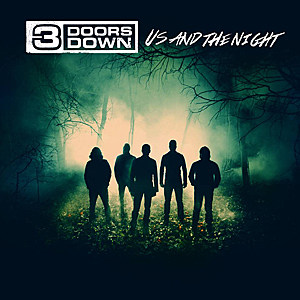 3 Doors Down have filled the last few years with a greatest hits collection and an acoustic tour, but the veteran band is now en route to releasing their sixth studio album.

The disc is titled Us and the Night and it’s on target for a March 11 street date. As revealed in a statement on the band’s Facebook page, the band spent two years writing and recording the effort, which will arrive in a couple of months.

“We’re all excited to release our new album Us And The Night. It’s truly been a labor of love and we can’t wait to get these songs out to our fans around the world.” In addition, the band has selected an edgy new track called “In the Dark” to be the lead single from the album. The song is expected to surface everywhere next Friday (Jan. 15).

So far, 3 Doors Down have revealed their participation in the Welcome to Rockville, Fort Rock and Carolina Rebellion festivals this spring, as well as a Mississippi Valley Fair stop in August, but as singer Brad Arnold alludes to in the band’s Facebook statement, the group will tour this summer. Stay abreast of their touring dates here.

3 Doors Down, Us And The Night Track Listing