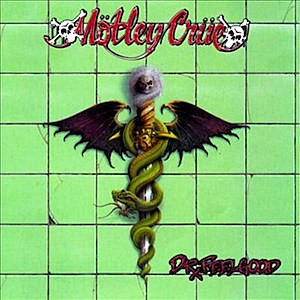 Five albums into their career, Mötley Crüe were unapologetically obsessed with crafting the kind of sticky, sleazy hard rock that defined MTV hair metal and hooked the masses like steaming bowls of salty buttered popcorn. Dr. Feelgood, which came out September 1, 1989, was basically the Crüe’s take on Aerosmith-style stadium rock. The album, which was performed with inexhaustible energy and brimmed over with giant-sized hooks, even featured Aerosmith vocalist Steven Tyler in “Sticky Sweet” and the intro to “Slice of Your Pie.”

“Nikki and Tommy and I hung out a lot,” Tyler told Rolling Stone. “Of course, we’re all akin by our old drinking and drugging days.”

Nikki Sixx wrote most of the songs for Dr. Feelgood after going through rehab and getting clean and sober, and tracks like “Dr. Feelgood” (about dope dealers who provide the perfect fix) and “Kickstart My Heart” (which Sixx wrote after surviving an overdose) are perfect examples of an artist writing about what he knows. “Slice of Pie” and “She Goes Down” exposed the other side of the debauchery-fueled Mötley playbook. But Dr. Feelgood isn’t just a filth-fueled recipe for a raging party, it’s full of the band’s most focused material and loaded with choruses as infectious as an STD.

“In rehab they told me that the only way to get clean is by believing in and seeking the help of a higher power that could return sanity to my life,” Sixx wrote in The Dirt: Confessions of the World’s Most Notorious Rock Band. “Most people chose God or love. I chose the only woman who hadn’t abandoned me my whole life: Music. And it was time to pay her back for her faith and perseverance.”

Other standout tracks on Dr. Feelgood include “Don’t Go Away Mad (Just Go Away)” and “Same Old Situation,” which features backup vocals by Night Ranger’s Jack Blades. “That was about a girl leaving a guy for a girl,” Sixx told Rolling Stone. “The subject plagues men worldwide. I love it because when [our label] Elektra heard it they were like, ‘Oh, this is perfect for a single.’ In Mötley fashion, we were like, ‘Wonderful. We’ll tell you later that it’s about lesbians.’”

Producer Bob Rock’s production played a large role in the enjoyability of Dr. Feelgood. Instead of giving the band a glammy sheen, as Tom Werman did on Theatre of Pain and Girls, Girls, Girls, Rock EQ’d the guitars with ample low-end and plenty of midrange so even the sing-songy numbers sounded gritty. And the band weren’t afraid to compliment boozy, blues-inspired numbers with syrupy ballads like “Without You” and “Don’t Go Away Mad (Just Go Away).”

“That’s a great song,” Neil said. “I love to play guitar and sing that song. It’s kind of a feel-good song. When that song comes on everybody wants to sing along with you.”

Since Mötley Crüe didn’t always get along, even when they were sober, Rock encouraged them to record their parts at separate times when they entered Little Mountain Sound Studios in Vancouver, British Columbia in mid-1989. Whether Rock’s plan strengthened the record or the musicians just had more ability to concentrate than they did when back when they were all raging drunk or high all the time, Dr. Feelgood is Mötley Crüe’s most consistent album, and one that at least sounds like it was a blast to make. In addition to the guest appearances by Roth and Blades, Bryan Adams, Cheap Trick’s vocalist Robin Zander and guitarist Rick Nielsen and members of Skid Row all contributed backing vocals.

Dr. Feelgood entered the Billboard album chart at number one and sold more than six million copies in the U.S. alone. The album won Best Hard Rock/Heavy Metal album of the Year at the 1991 American Music Awards and the title track and “Kickstart My Heart” were nominated for Grammy awards for Best Hard Rock Performance in 1990 and 1991, respectively. Both times the Crüe lost to Living Color, first against the song “Cult of Personality,” then against “Time’s Up.”