Editor’s Note: Aug. 21, 2015, marks the 25th anniversary of Anthrax’s ‘Persistence of Time’ album. Charlie Benante and Scott Ian recently stopped by our studio to discuss the disc, and you can see their reflections on the album above. And below, you can read an in-depth look back at the album by writer Jon Wiederhorn. 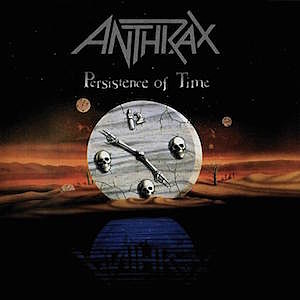 After touring with their heroes Iron Maiden in 1989, Anthrax decided they needed to evolve further from their thrash roots. But not everyone in the band was on the same page regarding exactly how they should grow, which caused strife within the band as the musicians worked on their fifth album Persistence of Time, which finally came out Aug. 21, 1990, after much hair pulling and teeth-gnashing.

Drummer and songwriter Charlie Benante and rhythm guitarist Scott Ian wanted to write a dark, harrowing metal album full of mid-tempo minor key riffs and lyrics that focused on mortality, prejudice and social discord. Meanwhile, bassist Frank Bello was growing disgruntled at having some of his song ideas rejected by the rest of the band because they didn’t fit the theme of the album and vocalist Joey Belladonna was having a tough time grasping the bleaker, more brutal sound his band mates were shooting for.

“We wanted to be taken as seriously musically as Judas Priest or Iron Maiden,” Ian told me in 2012. “It had not quite been three years since we put out Among the Living, which was totally thrash, but we already felt so far removed from that scene. I think we also felt that we were bigger and better than just a thrash band.”

As Anthrax wrote Persistence of Time and Ian presented lyrics to Belladonna, the vocalist approached the songs with the same sort of melodic drama he had applied to the band’s songs inspired by comic books and horror stories even though everyone else in the band felt that the new material called for a grittier, more aggressive vocals. The more Ian and Bello tried to convince Belladonna to inject extra venom into his singing the more he resisted.

“Working on that record was just not fun. We busted our balls to get those songs right, and to get Joey to learn them, and of course, he learned them. He sang them, but they don’t sound like they’re supposed to sound. If you listen to that record, and you just listen to the music, it’s much deeper, denser and darker than anything we’d ever done, and it has more in common with Sound of White Noise, musically, than it does State of Euphoria.”

Belladonna’s inability to see eye-to-eye with Ian was especially vexing since the lyrics for Persistence of Time were the guitarist’s most personal and confessional to date. He was paying more attention to the hypocrisy and enmity that flourished within society and wanted the songs to reflect his personal growth.

“My marriage was ending and suddenly everything seemed very different in the world to me than it did before,” Ian says. “It quickly got to the point where I couldn’t stand listening to Joey sing my words. I hated what he was doing and at the same time it was like we were pulling teeth to even get that out of him.”

In December, 1989, after spending the greater part of a year trying to get the songs to sound right, Anthrax entered A&M Studios in Hollywood, Calif., with producer Mark Dodson. In an effort to retain a tight grip on the songs Anthrax co-produced the album. In February 1990 ,they left the studio exhausted and frustrated. Although Belladonna didn’t know it at the time, Ian and Bello had already talked about working with a new vocalist. But first they had to tour for Persistence.

“We worked our asses off and we did great,” Ian said. “We had another gold record, and everything was going awesome. The shows were packed, we were selling out everywhere. We did Clash of the Titans and actually made money for the first time in our career. Before, we had always put everything we made back into the production. This time, we spent a ton of money on our stage show because we wanted to be like Iron Maiden and we still made money. So, from a business standpoint we were fine. But inside everything was falling apart.”

As well as Persistence of Time did, Ian feels like the record is underrated by metal fans, some of whom were disappointed that it wasn’t thrashier or more escapist the way Among the Living had been. At the same time, he accepts responsibility for never providing listeners with a more straightforward path to follow and for accidentally leading them astray by releasing the rap-metal spoof “I’m the Man” and the Public Enemy collaboration “Bring the Noise.”

“I feel like after Among the Living, we never made it easy for our audience,” he said. “I still think Persistence of Time is a great record, but it’s very dark. We’re not smiling onstage any more, we’re not wearing jams and there was definitely a different vibe. In concert people would shout ‘Play “I’m the Man!” And we didn’t want to play ‘I’m the Man’ anymore. Then we did ‘Bring the Noise,’ and that brought us somewhere else entirely. We loved it, but I think it misled some people who wanted us to be like that from then on. When we finally fired Joey, a lot of our old fans were totally thrown for a loop, and a lot of them bailed on us and didn’t come back for a long time if they ever did.”

Joey’s dismissal came not long after Anthrax were invited to appear on the sitcom Married With Children for an episode that first aired Feb. 23, 1992. The band played “In My World” on the program and had a few lines of dialogue. Ian still regrets asking the band’s then manager Jonny Zazula to fire Belladonna, which he did with a swift phone call. But the guitarist says he had too much stress in his personal life and couldn’t handle being the one to oust the vocalist.

Armored Saint vocalist John Bush replaced Belladonna and recorded four full-length albums with the band, but quit in 2005 when Anthrax brought back Belladonna for a reunion tour of their Among the Living lineup. The tour was fraught with complications and grievances and Belladonna parted with the Anthrax again until 2011 when he rejoined and the band recorded its comeback album Worship Music, the singer’s first studio album with Anthrax since Persistence of Time.