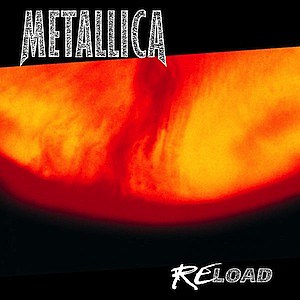 In May 1995, Metallica entered The Plant Studios in Sausalito, Calif., to record a double album as the follow-up to 1991’s Metallica (aka The Black Album), which catapulted the band from thrash heroes to mainstream rock stars. But by February 1996, Metallica had only finished about half the songs, so they scrapped the double-album plan and opted, instead, to release two records one year apart. The first, Load, came out June 4, 1996. Then in July 1997, Metallica returned to the studio to continue working on the 13 songs they didn’t finish the first time. On Nov. 18, 1997, they released the finished batch as Reload.

“The two records belong together and they should have come out at the same time, but they just weren’t done,” guitarist and vocalist James Hetfield told me in 1997. “We want these albums to be twins.”

“Basically, we just didn’t feel like being in the studio long enough to finish all the songs,” guitarist Kirk Hammett said. “We decided it would be wiser if we did two albums and staggered the releases. That way, we’d get more mileage out of them. We’d have a nice break in the middle of the touring cycle to work on Reload, then once it was out, we’d go back out on tour. That made more sense than just putting out a double album. Also, if we did a double album, it would have been a lot more material for people to digest, and some of the songs might have gotten lost in the shuffle.”

While the songs for Reload and Load were originally meant to be viewed under the same microscope, there are differences between the two albums. Load was brash and bluesy, but unapologetically straightforward. Reload, by contrast, was more experimental, blending biker metal, southern rock and unconventional arrangements into a bracing batch of songs that were familiar, but refreshingly adventurous.

“Having lived with those songs for two years, the four of us came back with very different ideas of what they should evolve into,” Hetfield said. “The good news was we still liked them, and we wanted to put them out. It’s important to point out that those songs weren’t the rejects from the first session and I think because of the extra time we had to put into them there’s a little more extremeness to them, which I like. It was a little more exciting for us to figure out more f—ed up chords, things that grind, dissonant bits, than songs that were just heavy. In a few of the songs there’s helter-skelter tension built in there. We really stretched the limits of what a guitar and amp could do, which was fun.”

“There wasn’t as much of an emphasis on melody,” agreed Hammett. “Also, we grew as musicians since the release of Load, and technology brought us new things to try in the studio. We had just come off a great tour so our chops were up. And we were using the studio more effectively than ever.”

“The Memory Remains,” featured a dusky rhythm, a serpentine riff wild, wah-wah saturated licks and raspy guest vocals by the legendary Marianne Faithfull. The singer and actress, who also appeared in the video, worked perfectly for the theme of the song. “It evolved into this ‘Sunset Boulevard’ thing about this twisted movie star who still thinks they’re hot s—,” Hetfield said. “We needed a real character, been-through-it-all voice, and we were trying to think of someone when [producer] Bob [Rock] suggested Marianne Faithfull. We flew to Dublin on the way to Belgium, got her drunk and put her on the studio and she sang this bit. It was perfect.”

Another surprise came on “Low Man’s Lyric,” which includes a hurdy gurdy passage that sounds almost like a cross between an accordion and bagpipes, and lends a haunting vibe to the world-weary ballad. “That song had been recorded already and it came out like a metal ballad,” Hetfield said. “We’ve got so many of those f—ing things — big drums and all this — so I finally convinced Lars to ditch the snare and play something else. Tom Waits inspired that. He’s really good at finding music in any little instrument. So we re-recorded it. [Our friend] Jim Martin (ex-Faith No More) has a hurdy-gurdy in his house, and I sat and f—ed around with it for a while and I thought, ‘F—, this thing is awesome sounding. We’ve got to put it somewhere.’ So we brought it into the song and figured out a melody.”

Metallica gave themselves three months to record Reload, and since the songs were mostly written they figured that was more than enough. But the band spent more time than it expected trying to find more interesting ways to approach the material than it had originally come up with. “We re-recorded a lot of the guitars because the new sounds we had were just better,” Hetfield said. “We also did a lot of re-editing. The songs themselves were good, but they needed to be re-thought. So we’ve got Pro Tools in there twisting songs around. There’s no secret that there are some drum fix-ups that happen on the computer, and that takes time.”

Bob Rock and his staff painstakingly worked with every beat, riff and vocal to make sure they had the right intonation and the meter was perfect. It was a sticking point for Hetfield and his bandmates, but instead of making it a source of discord, Hetfield did his parts the best he could and then walked until the album was done.

“Where they go is a room that I just don’t want to go in,” Hetfield said. “I don’t really agree fully on what goes on in there so I stay away. I’m not really against Pro Tools, but I just think it takes a lot longer, and I think it could be solved by playing better. But it has become something a little too big in this band. I don’t think it’s that necessary. Some other people in the band do, so I let it be. There are some cool loops and strange sounds you can create through the computer, and you can sit and f–k with that s–t all day, but we’re not gonna have some computer sitting with us onstage, that’s for sure.”

Because of the extra time that went into editing, Metallica had their backs against the wall when their studio time was almost up and they were still working on Reload. “No matter what we try to do we always end up spending 60 or 70 percent of our time on the first 20 percent of the album, and then the last 30 percent on the last 80 percent of the album,” Hammett explained. “It felt a bit more like crunch time because we didn’t have a lot of time to begin with. The songs were already written and the drums were already recorded, so on paper it seemed like a total cake walk, but in true Metallica fashion, it didn’t work like that.”

Like Load, Reload featured cover art by controversial photography Andreas Serrano, who uses urine, sperm and milk in his psychedelic shots and whose striking 1987 image Piss Christ – a crucifix submerged in a bottle of urine – caused public outrage from conservative and religious groups. “I hated the art for Reload, but it had to match Load,” Hetfield said. “It’s matching hatred. I’m not a big fan of the man and his perversions. There’s art and then there’s just sick mother—ers, and he’s one of them. The thing is, they belong together because they’re both weird combination of liquids. I don’t care if the guy blows donkeys. The art has got to match.”

Ulrich and Hammett agreed with Hetfield but unlike their bandmate they were thrilled to return to Serrano for another piece of art. “I’m really into Serrano,” Hammett enthused. “I really like his picture of [a man about to have sex with] a [naked female] dwarf [from his History of Sex series]. That’s one sexy dwarf.”

Revisit the Story Behind Metallica’s ‘Load’