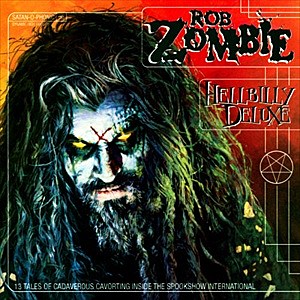 GeffenNot long after Rob Zombie broke up his freakshow band of 13 years, White Zombie, he launched his solo career and rose to even greater heights. His debut album, Hellbilly Deluxe: 13 Tales of Cadaverous Cavorting Inside the Spookshow International, came on Aug. 25, 1998, and anyone angry about the demise of White Zombie quickly forgot why they were mad at the imaginative frontman.

Hellbilly Deluxe… wasn’t a dramatic departure from the last two White Zombie albums. The music ramped up the electronic elements and the songs contained even more samples, but the spirit was similar. The album debuted at No. 5 on the Billboard album charts, selling more than 121,000. Less than three months later the album was certified Platinum. To date it has sold over three million copies in the U.S.

The differences between White Zombie and Rob Zombie are most evident in the way the bands created their albums. According to the singer, White Zombie were rarely on the same page and seemed to like being miserable, while everyone in Rob Zombie’s band enjoyed working together. Zombie wrote all of the songs for Hellbilly Deluxe… with producer Scott Humphrey, and worked with a core band of guitarist Riggs, bassist Blasko and drummer John Tempesta, the latter of whom was also in White Zombie.

“I don’t want to slag White Zombie,” Zombie told me in 1999. “I just think the new band plays better and sounds better. Their attitude and excitement are so cool. White Zombie always seemed like fragmented people all over the place. This really seems like a group of friends making music. It’s a feeling I’ve never had before. I would see it with other bands but I never experienced it until I did [Hellbilly Deluxe].”

When I talked to Riggs in 1999, he said he and Zombie were cousins who knew each other growing up. Zombie, however, said he didn’t meet Riggs until ex-Nine Inch Nails guitarst Danny Lohner introduced the two in Arkansas. “Riggs and Danny knew each other for a long time — I’m not exactly sure how,” Zombie recalled. “Danny was just like, ‘I know the perfect guy.’ He gave me Riggs’ phone number and I called him out of nowhere. I trusted Danny, so that was it. Riggs came out and he was great. We didn’t have a bass player yet. Riggs and I hung out and talked and I told him everything I wanted to do. He said, ‘That sounds f—ing bad-ass.’ That’s all he kept saying. He went, ‘This is exactly what I always wanted to do.’ And eventually we played together.”

Riggs, who left Zombie’s band in 2003 to form Scum of the Earth, has an entirely different story, and insists Zombie’s maniacal persona is more than mere theater.

“Rob tries to play it off like he’s a normal, well-adjusted guy but he’s not. He’s f—ing insane,” Riggs said. “He burned a f—ing ‘X’ in my forehead. I told my grandma, and she said, ‘Yup, that’s Rob.’ You see him in a magazine wearing a giant robot suit with freaky eyes looking all crazy. And he’s able to pull it off like, ‘Oh, this is just an act. It’s nothing.’ But it’s not nothing. He f—ing walks around like that at home in a big robot suit with giant claws. Then in a magazine he’ll say, ‘Oh, the robot, monster thing. It’s no big deal.’ But that’s really how he lives. He’s nuts.”

Zombie and his backing band started recording Hellbilly Deluxe… with Humphrey in the early 1998 at the Chop Shop in Hollywood, California. Two Ex-Nine Inch Nails members, Lohner and keyboardist Charlie Clouser guested on the record, as did Tommy Lee. As the drummer told MTV News, he had just been released from jail after serving four months of a 180-day sentence for assaulting his ex-wife Pamela Anderson and was visiting Humphrey, who produced Mötley Crüe‘s Generation Swine, when Zombie invited him to sit in. “They asked me to play and I was like, ‘I would love to play right now — just kind of check out [and] really do some music,” said Lee, who played on the tracks “Meet the Creeper” and “The Ballad of Resurrection Joe and Rosa Whore.”

“When we were done with the album I was real happy with it and I thought it came out good,” Zombie said. “But I had no idea how it would do. The climate for putting out a solo record was horrible because heavy music was at its most dead point. Other people like Jerry Cantrell and Scott Weiland put out solo records and people didn’t really seem to care. If ever it looked like there was a classic bad move on my part, this was it. But it all worked out great.”

One reason Hellbilly Deluxe… was so successful is that Zombie gave the people what they wanted. White Zombie fans were relieved he hadn’t deviated too much from his former band, and since the guitar parts were heavy and crunchy and the computerized parts were more prominent, the album appealed both to metal and industrial fans.

“My basic theory is that fans don’t want you to change,” Zombie said. “That’s why AC/DC and Slayer are always gonna draw a crowd — because they never change. People want one constant in their life. I didn’t want to Ramones to change. I wasn’t bored with that yet. 22 years and 25 records of four guys in leather jackets going ’1,2,3,4!’ That was fine with me. I didn’t want it to end.”

At the same time as Zombie was trying to appeal to his fan base, he was also trying to make music that was more interesting to him than the stuff he had done in White Zombie. As it so happened, the sound Zombie was striving to include in his music gave his songs a dancey groove that appealed to the masses.

“I think people could tell I was having a good time making this music and playing around a little with this different technology and these different sounds,” he said. “As long as I’m having fun with what I’m doing then it will probably come through in the music. Just to do guitar, bass and drums forever would get to be such a drag. And with White Zombie, bringing that [electronic] stuff into the band was not something everybody else wanted to do.”

For the guitar tones, Riggs tuned down and boosted the midrange sounds, but held back on the distortion. “When we did the album, we didn’t want it to sound like everything else – that same old heavy metal thrash guitar sound,” Riggs said. “So we’d try to get cleaner tones, but still heavy. We’d use drop ‘B’ tuning, so it wasn’t exactly like the White Zombie tone. That was really distorted, super no-midrange metal gutiar. This one, we just put straight into an amp head and that was it. It was really rhythmic and it had a lot of kick.”

Hellbilly Deluxe… included three singles that still feature prominently in Zombie’s live set, “Dragula,” “Living Dead Girl” and “Superbeast.” In October, 2009 Rob Zombie released the remix album of Hellbilly Deluxe tracks, American Made Music To Strip By, which featured mixes by Rammstein, Clouser, DJ Lethal, God Lives Underwater and others. Then in November, 2005, Geffen Records released a deluxe edition of Hellbilly Deluxe…, which included a DVD with Zombie-directed music videos of all of the songs on the album.

See the Yearbook Photos of Rob Zombie and Other Rockers