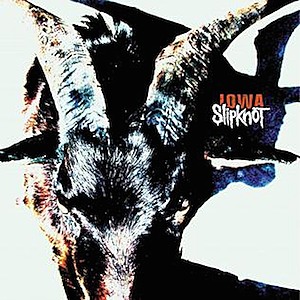 Turmoil, disaffection, misanthropy and self-indulgence have always been creative tools for Slipknot. But never have the nine-piece hate machine been angrier, more chaotic or more unhappy than they were when they wrote and recorded their second album, Iowa, which came out Aug. 28, 2001.

With the help of producer Ross Robinson, who returned after working on the Knot’s self-titled debut in 1990, Slipknot crafted a tribute to ferocity and pain — an album that crammed elements of thrash, death metal, nu-metal and industrial into a spontaneous combustion of concrete, steel, bone fragments, viscera and controlled substances.

“We were falling apart when we did that record; I was a f—ing mess, man” vocalist Corey Taylor told me in 2008. “I was drinking a lot. I was in a relationship that wasn’t good for me and I didn’t want to realize it at the time. We went out to L.A. and I really started getting into booze and philandering. I was doing anything I could to feel good because everything felt really bad. I was eating a lot, gaining weight. I wasn’t feeling anything but misery.”

Other members of Slipknot were comparably damaged. The effect of sudden stardom coupled with bad business decisions that prevented them from seeing any actual money was exasperating, and the pressures of heading right back into the studio after exhausting themselves on the road supporting their debut was a punishing test of endurance.

“I’m pretty secretive and I was good at hiding my drug addictions,” said guitarist Jim Root. “But when we were making Iowa I was up for days on end partying and then I had a breakdown. One of the guys from our management company put me on a crystal table to try to mellow me out. I’m laying on this crystal table going, What the f— am I doing? Is this table gonna do anything for me, other than maybe straighten my back out? So I started to build a wall around myself. I separated myself from the band and everyone else.”

Second guitarist Mick Thomson was also at the end of his rope, but for an entirely different reason. “I was disgusted by those of us that got sucked into that world of sex and drugs,” he said. “I wasn’t hanging out in the dressing room and chasing skirt every night. Sorry. Not my thing. So I just avoided people. It doesn’t say ‘hate’ in Japanese on my f—in’ forearm for no reason. Seriously, the people who surrounded us were f—ing parasites.”

In the fall of 2000, drummer Joey Jordison and bassist Paul Gray worked together on the framework for most of the new songs, which they wanted to be louder and more violent than those on their first album. Then on Jan. 17, 2001, Slipknot entered the studio with Robinson to start tracking Iowa. Root and Thomson — who were both more into thrash and death metal than nu-metal — added a wide variety of grinding, waling passages, and the band’s demolition team of percussionists and keyboard manipulators fleshed out the songs with clattering and clomping beats, nausea-inducing squelches and experimental dissonance that expressed Slipknot’s discontentment with feeling trapped and forced to produce.

“I don’t remember the particulars, I just remember a lot of darkness and anger,” Taylor says. “I was cutting myself while I was recording and bleeding everywhere. Then I would get sick and throw up. I just wanted to feel something, I didn’t care what it was and I wasn’t letting anything go. When I was doing the [self-titled] album I was letting so much go and it felt good. Doing Iowa, it was just rage for the sake of rage. It was just gnarly and I was so f—in’ unhappy.”

The only member of the band who enjoyed working on Iowa was Gray, who relished the opportunity to be creative in a different musical context. He liked the primal urgency of the songs and the way the tracks were layered so thick there’s no room left to breathe. “It’s funny, man, ‘cause I wasn’t in that bad of a headspace,” he said. “I felt a little pressured because I thought we needed to get the record done while there was still some momentum going. [Percussionist] Shawn [‘Clown’ Crahan] has a family and didn’t want to be there, and some of the other guys were burned out and everyone was partying a bit more than they should have. I started doing lines of coke all the time. But for me, I thought everything was cool.”

For Robinson, working on Iowa was excruciating not because the nine members of Slipknot were angry and often intoxicated to the point of near-collapse, but because he was in tremendous physical discomfort. “I broke my back in a bike accident, which was really perfect for the album,” he said. “Slipknot were experiencing huge success and going out every night and not showing up in the studio on time. As soon as I broke my back motocrossing, I took one day off and showed up the next day in intense pain. I just went, ‘Look, motherf—ers, I’m showing up. Get your f—ing s–t together and get in here.’ That seemed to work.”

Several long, soul-ripping months later, Slipknot finished working on Iowa. As viciously heavy as it was, the album garnered universally positive reviews and was one of the most popular metal titles of the year. The album entered the Billboard album chart at No. 3 and went platinum on Oct. 10, 2001. The mid-paced first single, “Left Behind,” the closest Slipknot came to a melodic anthem, was nominated for a 2002 Grammy Award for Best Metal Performance, and the second single, the surging, rap-inflected “My Plague,” was nominated for a Grammy in the same category the next year. But the artistic highlights of Iowa are the explosive, uncaged adrenaline-rush “People=S–t,” the ranting “Everything Ends,” the brooding “Gently” and the rumbling, speedfest “The Heretic Anthem,” (replete with the gang vocal “If you’re 555 then I’m 666”).

In 2011, Slipknot’s label Roadrunner released a special edition of Iowa to celebrate the tenth anniversary of the album. The release included four music videos, audio recordings of the tracks on the DVD Disasterpieces, previously unreleased video footage and a short film called “Goat,” which was directed by Crahan.

“I hate the album, but it is brutality at its finest,” Crahan said. “People come up to me and say, ‘Do another Iowa.’ And I’m like [extends middle finger], ‘Sit on this! You know why? We almost all died.’ That’s how f—ing fun it was! We almost all died.”

See the Yearbook Photos of Corey Taylor and Other Rock Stars