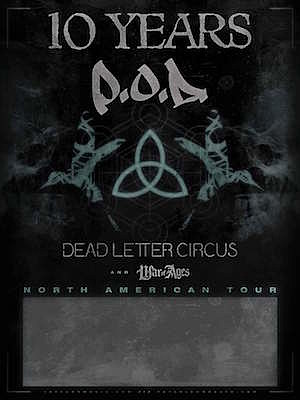 Get ready to shake off the New Year’s hangover! Rock doesn’t sleep, so you can expect some of rock’s top acts to start up again shortly after taking a break for the holidays. For instance, veteran rockers 10 Years and P.O.D. are teaming up for a run in late January and February, bringing along Aussie upstarts Dead Letter Circus and War of Ages for what should be a great night of rock from start to finish.

10 Years are supporting their From Birth to Burial album. The singles “Miscellanea” and the title track have taken their place among a string of rock radio favorites for the group.

P.O.D. are currently rocking in support of The Awakening disc. The band has already hit rock radio with their single “This Goes Out to You,” while songs like “Speed Demon” and their duet with In This Moment’s Maria Brink on “Criminal Conversations” got early previews before the disc dropped.

Meanwhile, Dead Letter Circus have been tearing it up in support of their Aesthesis album, while War of Ages are touring off of their 2014 release Supreme Chaos.

Dates for the run begin Jan. 28 at Ziggy’s in Winston-Salem, N.C. The trek will continue through a Feb. 16 finale at Los Angeles’ Whisky-a-Go-Go, though it has been hinted that more dates will be added. Tickets go on sale this Friday (Dec. 18). See the full itinerary below.